If You Don’t Immerse When you Baptize, You Baptize Like the Devil Does…

Via James Mustard on the FB-

Look, I Don’t Know This Guy, But He’s a Monster

He’s got books up against cinder blocks.  Books!!!!!  Next to (rubbing against with their soft book skin) sandpaper rough blocks.  MONSTROUS!

Why not just go ahead and flay your books with a glass tipped whip, you monster.

DON’T BE THIS GUY!  Don’t be a monster to your books.

Though he didn’t mind others who did…

Recently discovered in the Barth Archives at Princeton, a manuscript Barth wrote just weeks before his demise.  Printed in a perfect replica of his meticulous tiny handwriting, this book is sure to make waves in the theological world. 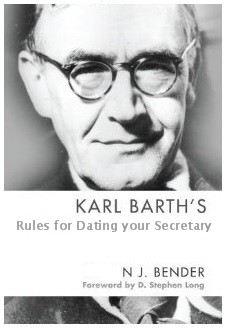 It’s All About the Beer for You, Isn’t it Martin?

For instance, if I were to say: “Wittenberg beer quenches the thirst, but Annaberg beer does so too,” I would not be excluding any other beer from doing the same thing. But matters change if I say: “If you do not drink Wittenberg beer, you will find no other beer to slake your thirst.” Thus Christ does not confine Himself here to an affirmative statement, but He excludes everything else as He says: “Unless you eat the flesh of the Son of Man and drink His blood, you have no life in you.” Thus he who despises His flesh will find that nothing else will prove helpful or be accounted valid. I may call on St. Mary or St. Peter, but they cannot help. All else is ruled out completely. In brief, all other methods are rejected.

Martin… beer is hardly a fit illustration for the uniqueness of Christ’s sacrifice.  You German sot.

Every Philosopher, Ever, In One Meme

What Happens When I Come to Lecture At Your Institution? There Are Long-Lasting Effects!

Richard Goode related this story in 2018-

This is a perfect illustration of how our influence on people’s lives can be far wider and more profound than we can ever imagine.   Last year, Jim West came to the UK to give a lecture. Over a year later, on a small Warwickshire village many miles from the university, I was walking past an after-school nursery play group, when a small boy, wearing a plastic bucket on his head, in a booming deep voice, bellowed fiercely at a cowering ‘friend’, “You are going to HELL!”
Just a coincidence?
I think not.

Amen and amen.  So if you want your entire vicinity to feel the ripples of your conference, you should invite me to speak.  Amen.

If Melanchthon were Seeking Tenure Today

Professor Melanchthon arrived in 2018 to teach Greek, a subject in which there were few resources in this region yet one in which we wished to establish a presence, with Leipzig with Peter Mosellanus being our only serious competition in these territories. From the start Professor Melanchthon established himself as a pathbreaker, delivering an inaugural address resplendent in the aura of the new learning that was gaining ground in his undergraduate alma mater Heidelberg and at Tübingen, where he received his MA. Professor Melanchthon’s talents were recognized early on by our colleagues Luther and Spalatin, and although his students had difficulty at first with his Swabian accent, he has proven to be a popular lecturer and a supportive mentor to many students.

Professor Luther formed a strong alliance early on with this younger colleague, who provided valuable aid in theological and linguistic matters. A significant career-development move was his pursuit of the baccalaureus biblicus in 2019, which provided a theological credential alongside his training in the liberal arts. His teaching, almost since his arrival, has included theology as well as classical studies, and he is almost alone among his colleagues in holding that a thorough knowledge of the biblical languages is necessary for competent work in theology. We doubt that faculty mentoring during his probationary period would have changed his mind on this novel and still-controversial matter. Similarly regarding his obstinacy with certain opinions, there have been reports from students who find his use of “sophist” and “papist” for adherents to the older faith offputting, even challenging. Members of the committee recalled the grievance of two years ago, in which Professor Melanchthon’s response (“I could call the pope the Antichrist if you’d prefer, you idolater!”) failed to bring much needed calm to our campus. We can certainly hope for a change in tone as his teaching matures.

The Publication Record raised questions within the committee that we can neither avoid nor easily answer. Without denying that the Loci communes (2016) has been hugely popular, there are concerns about its originality, specifically whether its argument depends on familiarity and agreement with Professor Luther’s work; its use as a textbook in theology, where it follows an unusual arrangement of material; and its failure to count as an example of classical scholarship as conventionally understood. Some in the committee reminded us that a Greek scholar’s proper work is translating Lucian into Latin, or composing Greek epigrams in elegiac couplets. While we cannot deny that Professor Melanchthon’s theological publications have brought welcome attention to our university, we believe that more attention to conventional classical efforts will serve our needs for a European presence in Greek studies. He is currently following a dispute which Professor Luther is carrying on with Erasmus, which may in the future raise questions about the relation of Professor Luther’s theological project with the humanism represented by that Patristics scholar in Basel. Let us be frank, Honorable Rector: the direction of Professor Melanchthon’s work is likely to make Wittenberg better known, in years to come, for theology than for humanistic study. No one is currently reading Statius or Ausonius, and Demosthenes and the rhetorical corpus are being studied by clergy candidates hoping to improve their preaching.

In the category of Service Professor Melanchthon has done more off-campus than on, as we see in his developing of important relationships with the Pirckheimer family in Nuremberg and with the young landgrave of Hesse. Professor Melanchthon has had the guiding hand in the design of the new Latin School in Nuremberg, and is working with Landgraf Philip to create the first “protestant” university, though what that latter term means remains something of a mystery. Certain members of the Committee were concerned that these activities did not sufficiently highlight Professor Melanchthon’s affiliation with our university, with the result that we are missing a uniquely valuable branding opportunity for Wittenberg.

We must, regrettably, report a divided vote on tenure, which according to the Manual of Operations means that decision rests with the Office of the Rector. Professor Melanchthon is unquestionably erudite and energetic, and may in time be ranked with Professor Luther as one of the luminaries of our institution. However, his work is moving increasingly toward promoting and articulating the new theology, with the inevitable result that we will fall in the rankings for humanism behind Louvain, Basel, and even possibly our perennial rival, Leipzig.

Via Ralph Keen (with minor date adjustments by me.)

If You See Someone’s Hair On Fire, The Decent Thing to Do is Try to Put it Out

Not just stand there and look at the ground.  Come on, people.  Geesh.

Luther’s Wife and Her Awesome Lips…

I guess when you need women to keep silent in Church, you convince them the mouth muffler is the fashion trend to adopt…

Heresy and Heretics, Humor, pseudo-christianity 11 May 2020

From the FB page of J Andrew Doole

I Love this Footnote

And kudos to the editor who allowed it!  Via Kara Schlichting on the twitter-

Signs of the Times… 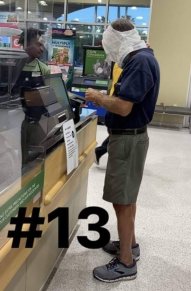 via Joel ‘The Methodist’ Watts on the FB.

Ladies, I’m Usually on Your Side… But, to you on this Matter, I say REPENT!

In 1674 during the great Coffee War you women were just dead WRONG!  Down with your untrue aspersions on coffee- God’s gift of goodness and joy.  Sinner women, repent!!!!!  Coffee isn’t enfeebling nor liquor!  Sinners!!!!  Away with your scandalous pamphlet and undeserved aspersions!!!!  (photos via the twitter). 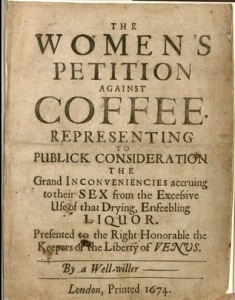 This was no mere typo….

From Mike Bird’s ‘Romans’ Commentary.  Also known as the Devil’s Commentary on Romans. 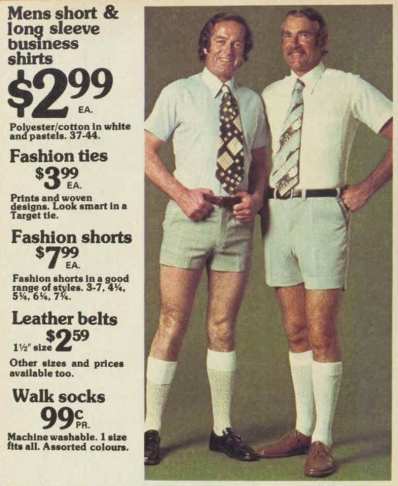