Today With Zwingli: Writing a Friend

At the end of a letter discussing such fun theological topics as ‘synechdoche’, Zwingli makes this interesting remark about the Eucharist-

That kernal of thought would bear fruit in 1529.  And forever after. 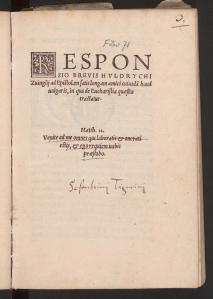 Responsio brevis ad epistolam satis longam amici cuiusdam haud vulgaris, in qua de eucharistia quaestio tractatur, was published 14 August 1526. The first half is a letter of Edlibach on which Zwingli made marginal notes and the second half is a letter from Zwingli to Edlibach responding more fully to Edlibach’s suggestions.

Part of Zwingli’s reply is this tidbit:

Point by point Zwingli convincingly addresses Edlibach’s concerns. The letter is edited in Zwingli’s Works and in the Theologisches Zeitschrift last century it was discussed and described as follows: 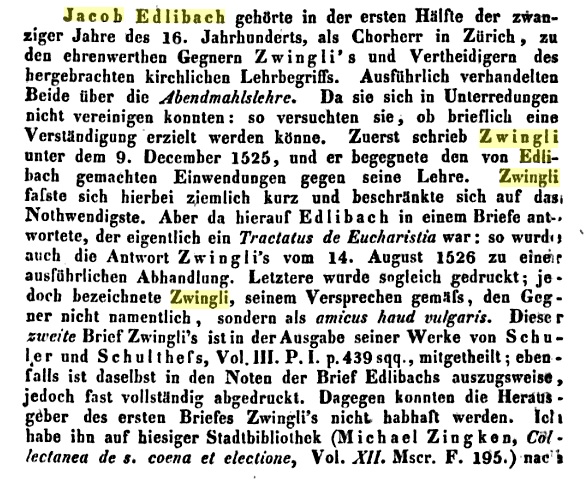 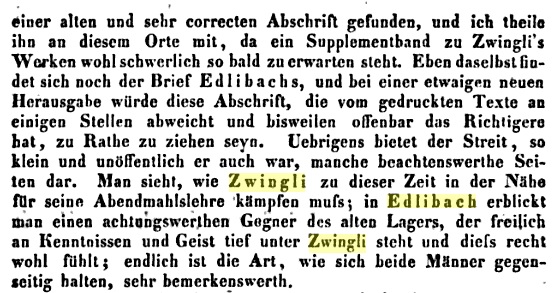 Zwingli … plainly announced that on the coming Christmas day, Friday, December 25, 1523, the Lord’s Supper would be administered under both forms, and daily thereafter there would be a brief Bible exposition in place of the daily mass.

This caused a bit of a stir, of course, but the City soon adjusted to the proper practice of the Supper and soon it was widely embraced.

Which nicely illustrates that when the Bible is correctly interpreted, good Christian folk have no problems changing their behavior in order to adhere more closely to it.

Zwingli Describes the Marburg Colloquy to his Friend Vadian

In an attempt to unify the Protestant forces, in 1529 Philip of Hesse invited Zwingli and Luther to meet in the city of Marburg. There, from October 1 to 4, discussion turned into rancorous debate, as it quickly became evident that on the paramount issue of the Eucharist neither side was ready to make concessions. This letter is Zwingli’s account of the exchange.

The landgrave decided that there should be separate preliminary conferences in private, Oecolampadius with Luther and Melanchthon with Zwingli, to seek between themselves for any possible measure of agreement that could lead to peace. Here Luther’s reaction to Oecolampadius was such that he came to me and privately complained that once again he had come up against Eck! Don’t tell this to anyone you can’t trust.

Melanchthon I found uncommonly slippery; he kept changing his shape like another Proteus, forced me—in lieu of salt!—to use my pen as a weapon and keep my hand dry, so that I could hold him fast for all his chafings and wrigglings and dodgings.

I am sending you a copy of a few extracts from our very lengthy conversations on the understanding that you will only show it to those you can trust—I mean, to those who will not use it to stir up another crisis: remember that Philip [Melanchthon] has a copy too, for I drew it up in his presence and under his eye, and many of his own words he actually dictated. But the last thing we want is to bring on a new crisis. Philip and I spent six hours together, Luther and Oecolampadius three.

On the next day the four of us entered the arena in the presence of the landgrave and a few others—twenty-four at most; we fought it out in this and in three further sessions, thus making four in all in which, with witnesses, we fought our winning battle. Three times we threw at Luther the fact that he had at other times given a different exposition from the one he was now insisting on of those ridiculous ideas of his, that Christ suffered in his divine nature, that the body of Christ is everywhere, and that the flesh profits nothing; but the dear man had nothing to say in reply—except that on the matter of the flesh profiting nothing he said: “You know, Zwingli, that all the ancient writers have again and again changed their interpretations of passages of Scripture as time went on and their judgment matured.”

The Hessian entourage, almost to a man, has withdrawn from Luther’s position. The landgrave himself has given permission for our books to be read with impunity, and in future will not allow “bishops” who share our views to be ejected from their place. John, the Saxon prince, was not there, but [Ulrich of] Württemberg was.

We finally left [Marburg] with certain agreements which you will soon see in print. The truth prevailed so manifestly that if ever anyone was beaten it was the foolish and obstinate Luther. He was clearly defeated, as any wise and fair judge would agree, although he now makes out that he was not beaten. We have, however, achieved this much good, that our agreement on the rest of the doctrines of the Christian religion will prevent the papal party from hoping any longer that Luther will be on their side. … *

On 17 August, 1525 (a very, very busy year for Zwingli) he published his Subsidium sive coronis de eucharistia which he dedicated thusly:

The book came to life, according to Zwingli, as a result of a dream he had in which in a moment of inspiration, he saw clearly, for the first time, the true meaning of the Supper.   Specifically, he remarks that Exodus 12 came to mind while he was lying in bed and that he sprang to his feet, opened his Septuagint (which he apparently kept right at his bedside) and read it.  The next day, they discussed it at the Prophezei and that discussion became the outline of the present book.

Those words could easily have been in Zwingli’s mind when he published, on the 8th of February 1527, his Amica Exegesis, id est: expositio eucharistiae negocii ad Martinum Lutherum.

The book which follows is a step by step easy to understand exposition of the Lord’s Supper.  Unfortunately, Luther didn’t get it.  But he didn’t want to get it.  Even when they all met a couple of years later at Marburg, Luther couldn’t be convinced by Scripture or sound reasoning.  He remained, to the end, invincibly ignorant on the subject.

The Eucharistic conflict wouldn’t be settled later on at the Colloquy at Marburg, not matter how much the participants wished. The divide was too wide and the underlying theological perspectives too different. For Luther, salvation was the work of God, and man (who cooperated in his own salvation by receiving the instruments of grace). For Zwingli, it was the work of God alone. These two views are incompatible and irreconcilable.

Bugenhagen had written Zwingli asking him to clarify his view of the ‘Lord’s Supper’ and on the 23rd of October in 1525 Zwingli obliged with his Responsio ad epistolam Ioannis Bugenhagii.

Peppered with Scriptural proofs, Zwingli shows Bugenhagen in meticulous detail why ‘hoc est’ in the celebration of the body of Christ in the Supper should be understood “significat”. ‘This signifies my body…’ etc.

Zwingli’s view persuaded many but it didn’t persuade Luther or the other Catholics of Luther’s mindset. It never could, because Luther was far too chained to his mystical past.

Stabbed in the Back

On the 24th of August, 1528, Huldrych Zwingli published the forward to a new volume by Caspar Schwenckfeld of Ossig, Zwinglis Vorrede zu Schwenckfelds ‘Anweisung’.  In it he congratulated Schwenkfeld on his good work and his insightful comprehension of the meaning of the Lord’s Supper.  After all, Schwenkfeld wrote, among other things, that

The Holy Spirit is not bound to any earthly word.  Rather, Christ, the True Word of God, gives himself in the Holy Spirit apart from external mediation to the believing children of God.

Unfortunately Schwenkfeld had asked Zwingli to write the forward to his volume without telling him that he (Zwingli) would soon himself be the target of his (Schwenkfeld’s) attack.  In short, Schwenkfeld deceived, and used Zwingli and then stabbed him in the back.

The wretch was rightly driven from his home in 1529 and lived the rest of his days wandering, unwelcome, from town to town.  And it was a right long wandering, since he didn’t die until 1561, despised by Reformed, Lutheran, and Catholic.

What is the Eucharist?  Is it a sacrifice?  A memorial?  The means by which salvation is conferred?  A simple sign?  Those were the questions plaguing the Reformation beginning as early as 1522 and coming to a head in 1529 at the Marburg Colloquy.

In 1525 Huldrych Zwingli addressed the question in a quite scholarly volume titled Subsidium sive coronis de eucharistia and published on the 17th of August.

The story of Zwingli’s coming to a clear understanding, finally, of the meaning of the Eucharist is related by himself in this volume.  He remarks that Exodus 12 came to mind while he was lying in bed and that he sprang to his feet, opened his Septuagint (which he apparently kept right at his bedside) and read it.  The next day, they discussed it at the Prophezei and that discussion became the outline of the present book.

Texas, Seriously, What’s Wrong with You?

A Catholic church turned away eight-year-old Kevin Castro of Floresville, Texas, from his First Communion because he had cerebral palsy, according to the boy’s family.  When the Rev. Phil Henning of Sacred Heart Catholic Church denied Kevin his first reception of the Sacrament of the Holy Eucharist, Henning said the boy had “the mental capacity of a 6-month old” and didn’t have “sufficient knowledge of Christ” to participate in the religious rite, even though Catholic doctrine doesn’t specify what level of knowledge is adequate.

People with CP can comprehend things quite well.  I’ve known a couple of people who suffer from the disorder and their minds are quite sharp.  Silly priest.  There’s something in the water in Texas.  Via Antonio.

On the 24th of August, in 1528, Zwingli commended (with reservations) a new volume by Caspar Schwenkfeld to an interested public.  The book, about, naturally, the right understanding of the Lord’s Supper (it was 1528, the Lord’s Supper was on everyone’s mind).  In it S. asserted that the Holy Spirit doesn’t bind itself to human words (or things), but Christ, the true Word of God, distributes himself without intermediary to the people of God through the Spirit.

What Zwingli didn’t know when he commended the volume was that Schwenkfeld, after having gone after Luther and the Catholics, would soon make Zwingli his target.

Schwenkfeld’s volume was read by few and soon fell into utter disuse.  If it had been possible back then, you could easily have walked into your neighborhood bookstore and bought a copy for a penny just a few months after it appeared.  And Schwenkfeld’s life ended the same way his book did- as insignificant and unnoticed- a wanderer without followers or importance.  What he shows, though, is that anyone can write one thing that someone else will notice; but soon forget.