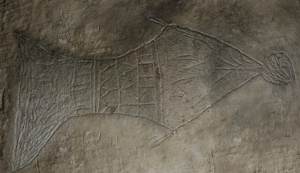 And he’s added a big fish and the story of Jonah to the mix just to spice it up:

Using a remote-controlled camera on the end of a robotic arm, investigators have found what could be the earliest evidence of a Christian iconography in Jerusalem, engraved on a set of “bone boxes” inside a nearly intact 1st-century tomb.  One of the limestone boxes, known more formally as an ossuary, carries a Greek inscription calling on God to “rise up” or “raise up” someone. Another box shows the carved image of a fish, perhaps with the prophet Jonah in its mouth. Allusions to fish and the “sign of Jonah” came to be widely used among early Christians, but not among Jerusalem’s Jews.

Those discoveries alone would be enough to get biblical scholars excited. But the investigators in this case are the same people who claimed five years ago that ossuaries from a nearby tomb were engraved with the names of the biblical Jesus and his family. They’re putting forth this new find as supporting evidence for their earlier claims, and resurrecting the topic in a newly published book (“The Jesus Discovery”) as well as a Discovery Channel documentary that’s due to air this spring.

And then the report says

This does reopen the whole question about the ‘Jesus Tomb,’” James Tabor, a scriptural scholar at the University of North Carolina at Charlotte, told me.

No it doesn’t.  It only opens up the wallets of the silly and the gullible who fall for all manner of unsubstantiated hype around Easter.  Timing is everything and so is marketing, since ‘there’s a sucker born every minute’ and to get the suckers to buy there has to be shiny packaging and huge claims.

“We now have the new archaeological evidence, literally written in stone, that can guide us in properly understanding what Jesus’ earliest followers meant by their faith in Jesus’ resurrection from the dead — with his earthly remains, and those of his family, peacefully interred just yards away,” Tabor and Jacobovici wrote.

No we don’t.  We have a purported find made under questionable circumstances.   And even Crossan, who seems to be open to the possibility that the thing is important, dismisses the supposed connection- and so does Witherington, who apparently learned his lesson after the whole James Ossuary fiasco and his own attempts to make money with a book on it:

Crossan said that was too much of a leap. “There’s nothing that associates [the Patio Tomb] with Joseph of Arimathea,” he said.  He said the two tombs may well have no relationship to each other: “This whole area is riddled with tombs, as far as we can tell.”  Ben Witherington, a New Testament scholar at Asbury Theological Seminary, voiced a similar view. “The attempt to connect [the Patio Tomb] to the other tombs is sheer conjecture, unless the tombs were connected,” he told me.

It’s just more marketing by the Discovery Channel team of ‘biblical archaeologists’ and here, most pertinently, we all need to remember- neither Tabor nor Jacobovici are archaeologists.  They’re marketers and promoters of their own ideas.  That’s all.

If you want to buy the book (that’s the aim of all the publicity- to get you to buy the book), go ahead.  But I recommend you wait a few weeks.  It’ll end up in the dollar bin soon enough, along with its predecessor.