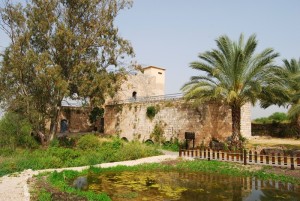 Apparent anti-Israeli vandals damaged an ancient archaeological site featuring a monk’s mill this weekend in the northern part of the country.  The site, known as the “Monk’s Mill,” dates back about 500 years ago. It was a flour mill, used for making bread by Christian monks who lived in the area’s monasteries around the present village of Tzippori (Sepphoris).  Inside the ruins of the building, officials from the Kishon Drainage and Streams Authority found shreds of Israeli flags that were ripped and burned. The building’s walls, doorposts, windows and entryways were damaged, officials said. The site, which is a highly important archaeological and tourist site, is visited by thousands of Israelis each year.

Vandals… Wretches. With thanks to Antonio for the tipand the link.

An Update on the Sepphoris Cemetery Inscription

Via Jack Kilmon on the Biblical Studies List, notice of this:

Greek inscription found at Sepphoris, tentatively dated to the fifth century CE, mentions Judah, the archisynagogos (leader of a synagogue) of Sidon, and Severianus Afrus, the archisynagogogs of Tyre.  —  Nagy, Rebecca, Sepphoris in Galilee: Crosscurrents of Culture. Raleigh: North Carolina Museum of Art, 1996.

So evidently the ‘recent discovery’ isn’t recent at all.