Talent scouts have been looking for Sweden’s next top model outside the country’s largest eating disorders clinic in Stockholm, outraged doctors have revealed. “We think this is repugnant. People have stood outside our clinic and tried to pick up our girls because they know they are very thin,” chief doctor Anna-Maria af Sandeberg told the Metro newspaper. “It sends the wrong signals when the girls are being treated for eating disorders.” The last incident took place a year ago, when the clinic was forced to change its procedures for the walks that its patients take. One of the patients who was approached by a scout was so ill she was sitting in a wheelchair at the time. Many of the girls who were approached last year were in their teens. Some patients have a body mass index as low as 14. A healthy BMI for adult women is considered to lie between 18.5 and 24.9 on the scale, which is a measurement of a person’s height-to-weight ratio.

Sweden: Keeping Christ out of Christmas

A nativity scene planned for a popular Christmas market in southern Sweden has been cut after the organizers felt it compromised their “political and religious independence”.

I hope they don’t call their holiday ‘Christmas’ then. They should call it ‘Doofus Day’ or even better – ‘Dum Dag’.

“I am devastated and think they are crossing a line here. What are they celebrating at Fredriksdal? Is it just a commercial affair?” said church official Eva Åsare to local paper Helsingborgs Dagblad (HD).

When the planning for the Christmas market at Fredriksdal Gardens and Museums in Skåne County began several months ago, the organizers initially thought that the church’s proposal of a nativity scene with children from two local congregations would be a nice addition to the market.

However, a few months into the planning, the church received an email saying that the nativity scene would be cut as the market wanted to safeguard its identity as a “politically and religiously independent operation”.

She finds it strange that a nativity scene would be considered out of place at a Christmas market, considering it depicts the reason Christmas is celebrated in Helsingborg, as well as many other parts of the world.

A talented head cook at a school in central Sweden has been told to stop baking fresh bread and to cut back on her wide-ranging veggie buffets because it was unfair that students at other schools didn’t have access to the unusually tasty offerings.

Not Sure If You’re Male or Female? It’s Ok,There’s A Pronoun for You Now…

Or do you want to spare your child the burden of being gendered?  Fear not, the Swedes have come to the rescue…

Earlier this month, the movement for gender neutrality [in Sweden] reached a milestone: Just days after International Women’s Day a new pronoun, hen (pronounced like the bird in English), was added to the online version of the country’s National Encyclopedia. The entry defines hen as a “proposed gender-neutral personal pronoun instead of he [han in Swedish] and she [hon].”

Absurdly, there’s much more on the topic…  here.  Soon a new version of the Bible in Swedish may appear in which God creates not male nor female, but ‘it’.

I Knew it Was A Lie: The Swede ‘Trapped in His Car’ Fraud

No one lives for months in a car without food, eating only snow. I’m surprised anyone believed the tale in the first place.

Reason 32,909 That God Should Destroy the World

Sweden may not condone file-sharing—it’s still illegal—but the country is officially OK with belief in the practice. Some 3,000 passionate file-sharers have gotten their beliefs recognized as an official religion. The Missionary Church of Kopimism—as in, “copy-me-ism”—has sought official status in Sweden since 2010, and it’s finally won the battle, TorrentFreak reports. The decision follows a pair of rejections; authorities wanted Kopimism to define its prayer practices. 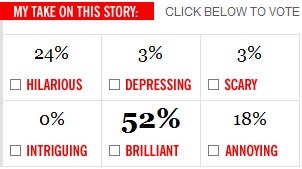 Yup- 52% of the people reading the story think it’s a fine idea…  Imbeciles.    That thump you just heard was me hurtling a screaming geek into the fiery pit.

Prayer: As you can see, dear God, people aren’t getting smarter or better, they’re getting dumber and worse.  Feel free to call it all off.  Your friends, the sane.

If They Don’t Believe in Jesus…

They aren’t members of the Church anyway. Regardless of what they might ‘believe’.

Only 15 percent of members of the Church of Sweden say they believe in Jesus, and an equal number claim to be atheists according to the results of a recent survey. I don’t even know what to say… I mean, what’s the point? Church without Jesus?! More than 10,000 members of the Swedish Church participated in a comprehensive membership survey carried out over the past year and dubbed “Member 2010” (Medlem 2010). According to the survey, 15 percent … Read More

Really? He Has to be a Lutheran

Because, and only because, there aren’t any Episcopalians or Anglicans in Sweden.

Mi hanno appena segnalato questa notizia –  Church officials in Sweden are pondering what to do about a Stockholm-area pastor who allegedly put photos of himself wearing a porn-themed T-shirt on Facebook.  La fonte è la UPI.

Not very bright.  One has to wonder about the guy’s sanity.  Or maybe he was trying to be cool.  And then this gem-