Author and Defense Analyst Thomas Ricks‘ interview on Fox News this morning was a brief affair. Ostensibly brought on to talk about Benghazi, UN Ambassador Susan Rice, and Republicans like John McCain criticisms of her, Ricks quickly gave his opinion that the matter was “extremely political, partly because Fox is operating as the wing of Republican Party.”

And with that Jon Scott abruptly ended the interview, thanking Ricks for coming on.

Fox: When you have four people dead including the first US ambassador in more than 30 years, how do you call that hype?

Ricks: How many security contractors died in Iraq, do you know?

Ricks: No, nobody does, because nobody cared. We know that several hundred died, but there was never an official count done, of security contractors dead in Iraq. So when I see this focus on what was essentially a small fire fight, I think number one, I’ve covered a lot of fire fights, it’s impossible to figure out what happens in them sometimes. And second, I think that the emphasis on Benghazi has been extremely political partly because Fox was operating as a wing of the Republican party.

Fox: All right. Tom Ricks, thanks very much for joining us today.

So much for ‘fair and balanced’.  Bring along a contrary viewpoint to their skewed ‘reality’ and they have no time for you.  Just like a certain little honey tee tee and others of that ilk.

Pseudo-Pastor Hipster Heretic, And Why I Wish the Office of the Holy Inquisition Were Freely Operating

I’d become a Papist if the Inquisition could rid the world of these lamentably despicable deceivers.

Here’s a pile of wood, Your Holiness Pope Ratzinger, and here’s a match. Say the word. (Via Bryan Bibb on FB).

First Romney Signed a Pledge to Push A Marriage Amendment… 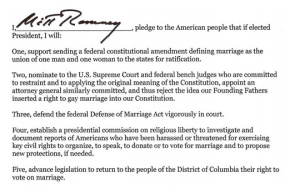 A top Romney aide appeared last week to reverse the campaign’s support of the Federal Marriage Amendment, which would bar states from allowing same-sex couples to marry.  In a little-noted comment in the spin room following this past week’s presidential debate in New York, Romney campaign senior adviser Bay Buchanan laid out what appears to be an about-face for the Republican presidential nominee on the proposed Federal Marriage Amendment. Buchanan said that Romney is a “strong advocate for the Tenth Amendment” — which protects states’ rights — and believes that marriage decisions are “a state issue.”  …  In the closing month of the presidential race, the Romney campaign has pushed forward with a focus on an image of their candidate as a moderate, including discussion of his time as governor of Massachusetts and running television advertisements highlighting his support for exceptions allowing for abortion in the case of rape or incest or for the health of the mother.

More Romney wishy-washiness.  Or less charitably- more Romney trying to appeal to more voters just so he can be elected.

The Most Dilettantish of All Dilettantes

“The Scribe” wants you to hear the new new revelation that Jesus personally told him to write. So, he did what prophets and recipients of divine revelation have always done: he set up a website, complete with praise from reputable individuals such as:

“Exactly what Jesus would say if he came to earth again! Perhaps this is how he will come again.”  –  Christian Person
“What Christians have been seeking for centuries. Literally millions will love it.”   – Catholic Bishop
“Speechless! I am totally amazed at what is here.”   – Person with ties to India and Hinduism
“Poetry for my soul.”  – Protestant Minister
“Marvelous! My wife and I have read John’s Gospel through twice to each other. Our favorite phrase: ‘God’s Heart is so big you can’t walk out of it.’”   – Couple with a Mormon background
“Many will find that this book is miraculous, since Jesus brings us into the Heart of God.”  – A Seeker

Worse than the idiot, and yes, he’s an idiot, who’s peddling this ignorance are the people who have endorsed it (if indeed anyone has. After all, anyone who lies about a new ‘revelation’ straight from Jesus himself will lie about his ignorance being endorsed too). The telling fact of these endorsers is that they are utterly anonymous. Doubtless they wish not to be named.

So, because this person (using the word loosely and preferring the word moron) claims what he claims- here’s the Dilly he so richly deserves: