Down in Georgia a Steven Furtick clone has taken it upon himself to ‘baptize’ a group of kids before a football practice.

A Georgia school district is investigating after video of a mass baptism was posted on YouTube. The video, posted by First Baptist Villa Rica, was shot on school grounds just before football practice. “We had the privilege of baptizing a bunch of football players and a coach on the field of Villa Rica High School! We did this right before practice! Take a look and see how God is STILL in our schools!” the caption with the video reads.  By Tuesday evening, the video had been removed from YouTube.

Baptism is the act by which believers identify with the Body of Christ, the Church.  Not in some abstract ‘church universal’ notion but in the quite concrete association of the redeemed sinner with a community of faith of which he becomes a viable member.

If the boys in this ‘baptism’ (which is really a farcical bastardization of actual baptism and its meaning) were not accepted as baptismal candidates by the Congregation; and if they didn’t agree to become members of that congregation, they were never baptized at all.

It is quite clear to anyone watching these sorts of things that the Furtick clones have no idea what baptism means, signifies, or demands.  They are making a mockery not only of the Church, but of the act of baptism itself.  They are precisely the reason why persons without adequate theological training should never be allowed to ascend a pulpit.

What’s The Difference Between Baptizing the Dead and Baptizing Infants? 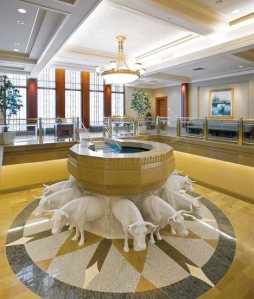 Jewish folk are rightly upset that Jewish persons have been baptized by the Mormons.  But what’s the difference between that and Catholics or Methodists or Anglicans or Presbyterians or Lutherans baptizing infants who cannot possibly have expressed a wish to be so treated?

If a person can’t assent to baptism it’s not really baptism is it- it’s something external and quite meaningless in terms of one’s own spirituality.

Baptizing infants and baptizing the dead are the same thing.  In both cases persons are treated to something without their consent by persons who think they’ve done something helpful.

France: De-Baptism… And the Problem With Baptizing Non-Believers

If ever there were evidence needed to call into question the practice of infant baptism, it can be found in France. Today.

In France, an elderly man is fighting to make a formal break with the Catholic Church. He’s taken the church to court over its refusal to let him nullify his baptism, in a case that could have far-reaching effects.  Seventy-one-year-old Rene LeBouvier’s parents and his brother are buried in a churchyard in the tiny village of Fleury in northwest France. He himself was baptized in the Romanesque stone church and attended mass here as a boy.  LeBouvier says this rural area is still conservative and very Catholic, but nothing like it used to be. Back then, he says, you couldn’t even get credit at the bakery if you didn’t go to mass every Sunday.

If he hadn’t been baptized before he was able to decide for himself, he wouldn’t need to ask to have his baptism undone.  This is precisely why infant baptism is inappropriate.  Until a person desires it, it remains a meaningless exercise in futility.

The lectures by Carl Beckworth (on Luther’s theology of Baptism) and Giesela Kreglinger (on Paul Gerhardt’s Hymns and their spiritual messages) were both very nicely done.  Informative and invigorating.  Fortunately if you couldn’t attend the lectures and sessions will all be available, in audio, at the Beeson bookstore (and doubtless order-able online too).

Here’s a slideshow of the morning:

Via Antonio, from whom I also swiped this awesome photo!

A Sacramento priest has been suspended from active ministry after parents complained that he appeared drunk Saturday during a church baptism. The Rev. Julian Medina, part-time parochial vicar at All Hallows Church in Sacramento’s Tahoe Park neighborhood, has been removed from ministry indefinitely, according to church officials. Medina, 64, arrived an hour late for the afternoon ceremony in which he was to preside over the baptism of 15 children. The priest slurred his words, had difficulty walking and later fell down, according to witnesses. “We apologize to the families who had to experience this incident,” said the Rev. Santiago Raudes, canon lawyer for the Catholic Diocese of Sacramento. A church deacon was called in to finish the baptism. About 150 people were at the church for the sacrament, according to Raudes. After Medina fell, church members carried the priest to the rectory.

At this point I’d have to say that it’s probably good that Catholics don’t baptize properly, or the little thing might have been drowned.

Oh This is INFURIATING!

Look at that!  Just LOOK!!!!  the ‘Pastor’ is standing outside the baptistery and immersing the kid without even bothering to get anything more than his hands wet! 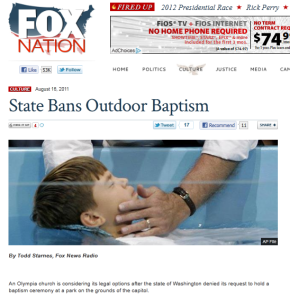 That’s INFURIATING.  Those sorts of baptisteries that are divided or that don’t necessitate the person performing the baptism to join in are an abomination.  What makes pastors who use such bestial creations born in the pit of hell itself think that they are above getting a little wet?

Are they too good to be damp?  Are they so important they can’t get their Armani trousers wet?  Are they above the persons they’re baptizing, separated from them by a barrier of disconnectedness?

If one person with one ounce of sense can demonstrate from Scripture that baptism was performed in such a prattish self serving manner than I’ll adopt the practice myself.  Until then, those who use baptisteries that seclude the baptizer from the baptized should be denounced by all lovers of the truth as abominable bastardizations of the rite and ordinance.

So the cartoon is altogether wrong anyway. Bob’s suggested re-do, though, is more on the mark. Those Catholics and their crazy ways!

I got this from Scott Bailey, who makes me laugh once a day. You can tell it’s not a Church of Christ book, because 1) it would be 12-year old, and 2) it would be full immersion, not sprinkling, and 3) it would say ‘save,’ not love. 😉 … Read More

via XKV8R: The Official Blog of Dr. Robert R. Cargill