The Meaning of Advent 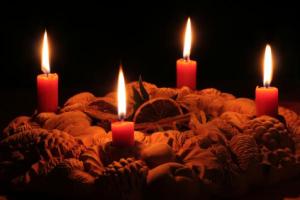 Advent is that blessed time of the year when Christians try to persuade God that their Lenten ‘repentance’ ‘stuck’ and they really, really are ready for the Coming of Christ… and oh, if they could also get lots of awesome stuff for Christmas Santa, erm, they mean God, that would be super.

The University of Munich and its Advent Calendar

Check it out here.  Simply click on the Day of December (the first, the second, the third, etc.) for Advent inspiration for that day.  And enjoy!

On this Monday of Advent…

“While kings of the earth lord it over their subjects, the divine King joined our ranks; while earthly monarchs demand subservience, God’s Son became a slave; while the rulers of this age attempt to defy mortality, the ruler of the heavens took on human flesh. The sceptre of Advent was a rod of affliction.” — Dr Justin K. Hardin, Tutor in New Testament*

When the Prince of Peace Comes…

I like very much what Keil has to say about this saying from Isaiah 2:4-

Since the nations betake themselves in this manner as pupils to the God of revelation and the word of His revelation, He becomes the supreme judge and umpire among them. If any dispute arise, it is no longer settled by the compulsory force of war, but by the word of God, to which all bow with willing submission.

With such power as this in the peace-sustaining word of God (Zec 9:10), there is no more need for weapons of iron: they are turned into the instruments of peaceful employment, into ittim (probably a synonym for ethim in 1Sa 13:21), plough-knives or coulters, which cut the furrows for the ploughshare to turn up and mazmeroth, bills or pruning-hooks, with which vines are pruned to increase their fruit-bearing power. There is also no more need for military practice, for there is no use in exercising one’s self in what cannot be applied. It is useless, and men dislike it.

There is peace, not an armed peace, but a full, true, God-given and blessed peace.

It is in war that the power of the beast culminates in the history of the world. This beast will then be destroyed. The true humanity which sin has choked up will gain the mastery, and the world’s history will keep Sabbath. And may we not indulge the hope, on the ground of such prophetic words as these, that the history of the world will not terminate without having kept a Sabbath? Shall we correct Isaiah, according to Quenstedt, lest we should become chiliasts?

“The humanitarian ideas of Christendom,” says a thoughtful Jewish scholar, “have their roots in the Pentateuch, and more especially in Deuteronomy. But in the prophets, particularly in Isaiah, they reach a height which will probably not be attained and fully realized by the modern world for centuries to come.”

Yet they will be realized. What the prophetic words appropriated by Isaiah here affirm, is a moral postulate, the goal of sacred history, the predicted counsel of God.

Sometimes the ‘oldies’ really are the good ones. And I don’t know about you, but the cessation of all conflict would be very welcome.

The First Sunday of Advent: Hope

Today marks the first Sunday of the Advent season, the 4 Sunday’s prior to Christmas.  In these four weeks Christians prepare themselves for the coming of the Redeemer and, in order, consider Hope, Love, Joy, and Peace- all which God alone can grant.

Advent, unlike Lent, is worthy of all Christian’s observance.  Lent manifests a heretical belief that merit can be earned, whilst Advent stresses the Grace of God as our only source of good.

Have a fine Advent One.