On April 28, David Bonner at the Wondering Eagle blog published a story about a family chased out of The Trinity Church because of a kiss shared by an adolescent boy and girl. The girl is one of Mark Driscoll’s daughter and the boy and his family attended The Trinity Church until Driscoll wanted the family evicted from the church.

In addition, Freese told me that Driscoll authorized the boy’s family members to be surveilled in the community and monitored on social media. Church funds were expended to hire security personnel to follow them and report back concerning their activities.

Read the rest.  And, hey, don’t join a cult like Driscoll’s.

Read all about it….

“After an embarrassing number of wrong prophecies and bungled predictions about the 2020 election, a group of charismatic Christian leaders have released a four-page statement of ‘prophetic standards’ to help correct abuses in the movement”

With thanks to Deane for mentioning it.

According to This Republican Woman, Slaves Loved their Masters… And She’s Exhibit 99,000 Why Most People Shouldn’t Be Allowed Within a Mile of the Bible

Honestly, you can’t make up this kind of ignorance.

The president of the Woman’s Republican Club of New Orleans this week defended a lawmaker from her party who believes that schools should teach the “good” of slavery.

I think people who think slavery is good should be slaves.

In a post to Facebook on Sunday, Martha Huckabay — a former delegate for Donald Trump — lashed out at a CNN segment which criticized Louisiana state Rep. Ray Garofalo (R-LA), who said that children should learn “about everything dealing with slavery, the good, the bad, the ugly.”

“You are right Stephanie Hilferty ‘none of us were around when slavery occurred,'” Huckabay wrote. “Slavery goes all they way back to biblical times, and if you’ve read your Bible, you would know that many of the slaves loved their masters, and their masters loved them, and took very good care of them, and their families.”

You can always tell the fake bible scholars: they generalize. 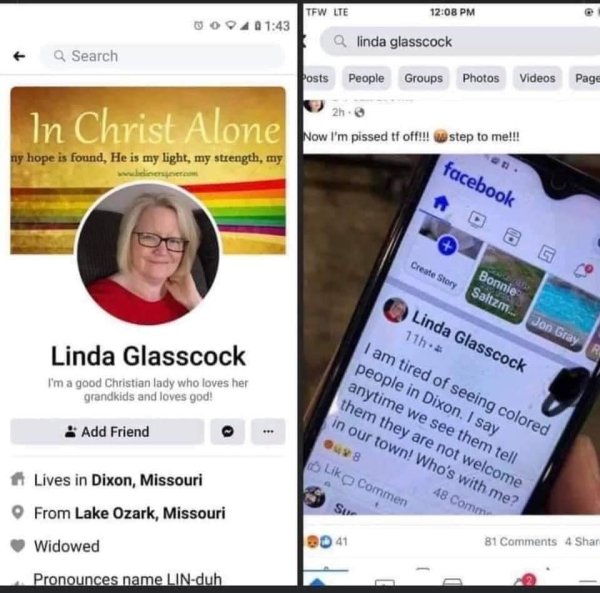 This is Why American Christians are So Theologically Ignorant

How one gets from Phoenician ships plying the Med to a Solomon as shipping magnate is a bit of a mystery.  And more than a bit of a stretch.

Frankly, it’s just more of the exaggeration we’ve come to expect from some ‘researchers’.

“Neither Israel nor Lebanon could tap into local gold and silver resources. The biblical entrepreneurs were forced to look to the horizon. The land of Tarshish was a vital source for Solomon’s silver. As the Book of Ezekiel recorded: ‘Tarshish did business with you because of your great wealth of goods.’”

Kingsley added: “What turned up in southern Spain is undeniable. Phoenician signature finds, richly strewn from Rio Tinto to Málaga, leave no doubt that Near Eastern ships voyaged to what must have seemed the far side of the moon by 900BC.

“When I spotted in ancient accounts the name of the hill where silver was mined at Rio Tinto – Solomon’s Hill – I was stunned. Biblical history, archaeology and myth merged to reveal the long-sought land of Tarshish celebrated in the Old Testament.

“It looks like Solomon was wise in his maritime planning. He bankrolled the voyages from Jerusalem and let salty Phoenician sailors take all the risks at sea.”

Every bit of that is the claim of a man describing a suit on the basis of a single button.

Former Hillsong Dallas Lead Pastor Reed Bogard and his wife, Jess, were under investigation for leadership failures when they abruptly resigned in January, Hillsong Church Global Senior Pastor Brian Houston said Saturday while announcing a pause in the operation of the Texas campus.

“Early in our process, the Bogards decided to resign from Hillsong Church. We accepted their resignations and acknowledged the time that the Bogards spent establishing our Dallas location,” Houston and his wife, Bobbie, told members of the church launched in 2019 in an email cited by The Daily Mail.

“It was very disappointing to learn that, while some of you experienced the Bogards as dedicated pastors, many others have experienced leadership that failed to meet the commitments and standards of Hillsong Church,” the Houstons continued. “I want to be the first to apologize to those who felt disappointed or hurt, and I pray that God does a swift work in bringing peace and healing.”

Lessons to be learned:

They aren’t the same thing.  Mary isn’t a god.  And she’s certainly not an addendum to the Trinity.

John MacArthur is a Hypocrite and No One Should Be Surprised

For decades, John MacArthur has railed on prosperity preachers, likening them to  “greed mongerers” who led First Century cults.

Recently, he’s also taken aim at scandal-plagued evangelical leaders, like the late apologist Ravi Zacharias and former Hillsong Pastor Carl Lentz, saying these celebrities were in ministry only for the money. That’s why “liars and frauds and false teachers” are in business, MacArthur said in a recent sermon. “False teachers always do it for the same reason—filthy lucre, money.”

Yet according to financial statements and tax forms obtained by The Roys Report, John MacArthur and his family preside over a religious media and educational empire that has over $130 million in assets and generates more than $70 million a year in tax-free revenue.

MacArthur and his family and related companies have been paid more than $12.8 million from ministry and donor funds. And MacArthur owns three luxury homes worth millions.

In one year alone, MacArthur made more than $402,000 for part-time work at his broadcast ministry, Grace to You (GTY), and another $103,000 from The Master’s University and Seminary (TMUS). This was in addition to MacArthur’s salary from the megachurch he pastors, Grace Community Church, as well as book royalties and speaking fees.

Raise your hand if you’re surprised that he’s a hypocrite.

The Jesus of History and the Christ of your Own Imagination

The only Jesus most people see when they look for him is the one they’ve created in the greenhouse of their own biased imagination.

They see nothing of the actual historical Jesus.

Todd Bentley, Heretic and Sexual Predator is Returning to So Called Ministry

Bentley, who turned 45 last month, said as the coronavirus pandemic raged in parts of the country in the summer of 2020, he was experiencing a time of healing and restoration with angels and communing with God.

It was last summer in July/ August 2020 that I had a series of angelic encounters, visions and personal encounters with the Lord that were absolutely life-changing. At the same time Jess and I used this time to see healing and incredible restoration in our own lives and marriage. During this awesome season of almost daily personal encounters the Lord spoke to me about my 45th birthday, which took place on January 10, 2021,”

Nope. Don’t fall for it. It’s all fraud.

You literally cannot make up this kind of insanity.

Pastor Johnny Enlow, who once said our nation’s future would involve the terms B.T. and A.T. (“Before Trump” and “After Trump”), that QAnon was “going to be proven so thoroughly,” and that the score of the College Football Championship was a sign that Trump would remain in power, is still spreading conspiracy theories. This time, he’s saying Trump is still president… according to Heaven.

“There’s all these dimensions that the Lord is coming to affect and change right now, and President Trump still has a very active, viable role in that,” Enlow said. “Believe me, God is doing things with him, and I won’t go into it more than that. But he’s not a passive player; he is recognized from Heaven [as] the primary government leader on planet Earth. People need to know that. From Heaven, President Trump is recognized as the primary government leader on planet Earth.”

Forget the popular vote. Forget even the Electoral College. All that matters now is whatever the courts (?) of Heaven say.

These guys are mentally ill.

Pastors at the scandal-ridden Hillsong Church lived lavishly on congregants’ tithe money, according to former Hillsong members and staff who spoke recently with the New York Post.

The church provided pastors and staff with pre-paid expense cards that they used to buy whatever they wanted—from designer purses to Manhattan hotel stays to huge quantities of food, the sources said.

Former Hillsong LA service pastor Nicole Herman told the Post that she personally loaded the funds onto expense cards for Hillsong pastors, including former Hillsong NYC Pastor Carl Lentz, who recently was fired from the church for an adulterous affair. Herman said the cards were also given to volunteers to make purchases for the church and its pastors.

If you attend such a ‘church’ and give your money to one, you’re just enabling scammers.  Nothing more.

If you ever need to know what a lying prophet of Baal sounds like, it’s like this:

And of the unfixable sort: 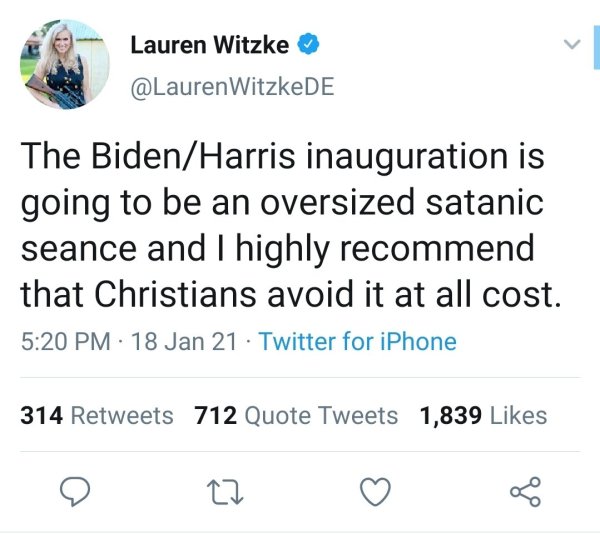 James Dobson is the Eric Metaxas of the Old Folk

And he’s just as unhinged.

James Dobson is alarmed about what he believes lies ahead under a Joe Biden administration: “The Left has now achieved ultimate power in the White House, in the House of Representatives, and in the Senate. Consequently, as I warned in December, there will be no checks and balances within our system of government. The most radical ideas promoted by President Joe Biden and his majority party will be enacted. We can infer from what they have told us that the years ahead will bring more regulation, less freedom, more taxation, less religious liberty, more socialism, less democracy, more funds for abortion, less support for the sanctity of human life, less funding for the military, more illegal immigration, more restrictions on speech, less patriotism, more wasteful spending, less support for families, more regulations on business, more appeasement of China, Iran, Russia, and North Korea, less support for the electoral college, trillions more dollars for climate nonsense, more LGBTQ propaganda, less moral compunction, more governmental corruption, less oversight of elections, more ‘cancel culture,’ fewer police officers, more gun control, and less government of the people, by the people and for the people. We can also anticipate quick passage of the horrendous ‘Equality Act.’ You might want to keep track of these items as they occur. This is just the beginning.” Dobson issued a similarly panicked warning when Barack Obama was elected in 2008.

Is that, among other things, it is impervious to truth.

For millions of charismatic Christians, the Capitol riot doesn’t change the truth: Trump’s win has been prophesied.

False prophecy. But they are unable to realize it. Very pathological. And very sad.