North American folk can acquire the volume from V&R’s excellent distributor ISD.  The publisher has supplied a review copy.

Pauline studies have been ramping up for a few decades (when the fascination with the quest of the historical Jesus cooled) and they show no sign of slowing down.  The issue for historical Jesus studies, of course, was the absolute paucity of actual evidence which resulted in all manner of wild speculations eventually resulting in the insanity of the ‘Jesus Mythicists’, a cadre of persons (not scholars) who denied the very existence of Jesus himself.

The same, I fear, will be the case with Paul and pauline studies if scholars don’t come to a point where they reject all the wild speculation presently festooning the field and instead stick to the facts.

The contributions in the present volume seek to affirm and enunciate historical details about the Corinthian community.  So the essayists examine the identity of the Christians in Paul’s community, the Sophist’s philosophical school (since it played such a significant role in the Corinthian community), the cult of Dionysius and the ‘phenomenon of speaking in tongues’ in that city and among those Christians, God’s ‘powerlessness’ in the light of Auschwitz and the role of God’s powerlessness in Paul’s theology, and finally the Pauline community and the unity of the Corinthian church.  Five authors presenting five chapters on issues central to any authentic understanding of the Corinthian church and the letters they received from Paul.

To be sure, this is not a collection of essays centered on Paul the man.  These essays are centered on the city of Corinth and its inhabitants.  In particular, its Christian inhabitants.  The papers here gathered stemmed from a conference on the topic held in Basel in 2018 (on the 28th of April that year to be exact).

The forward of the collection summarizes each of the contributions, giving readers a sense of where each essay is headed and how it gets there.  Each essay is meticulously constructed with the as usual for the Germans and Swiss attention to detail and evidence for facts presented.  Readers may wish to discover speculative guesses concerning this or that notion, but such speculations are absent.  Facts, and facts alone, are followed.  Each contribution also includes a useful bibliography.

There are no indices.  There is, however, a list of contributors with a brief bio for each.  And as each chapter is thoroughly outlined in the table of contents, an index of scripture or subject really isn’t necessary at all.

Each essay is instructive, but for myself, the outstanding contribution is that of Jacob Thiessen.  He investigates the cult of Dionysius and those speaking in tongues in Corinth and his is a model of scholarly presentation.  Not only is the essay informative, it is utterly engaging.  I won’t ruin the surprise for potential readers of this volume, but Thiessen’s work is the best on the subject of ‘speaking in tongues’ in the Corinthian context I have yet seen.

My hope is that the trajectory modeled so well by this collection will be followed and adopted by continuing pauline studies.  Speculation is good for no one.  Especially for the pursuit of truth.  Facts, on the other hand, enlighten us all.

This is one enlightening book.

Why Read the Bible in the Original Languages?

What an utterly exceptional little book, with a message that every single student in Seminary or graduate school considering ministry or teaching in a college or grad program must, simply must, hear and heed. 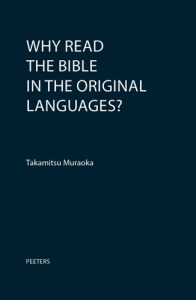 A comparison of multiple translations of the Bible in any language shows that they differ at hundreds of places, pointing to the continuing disagreement among Bible scholars and translators in their analysis and understanding of those places. To learn Hebrew, Aramaic, and Greek, the original languages of the Bible, is admittedly not everybody’s cup of tea. Knowledge of them does not necessarily provide a solution to these difficulties. However, there are not a few things in the biblical text which can be missed out if it is read only in translation. A range of linguistic issues touching on the three original languages are discussed in the light of actual examples. Matters of culture and rhetoric are also taken up. A special chapter is devoted to the Septuagint as a bridge between the two Testaments. The book is written in a non-technical style, hence easily readable by non-specialists, but specialists may also find things of interest. No Hebrew or Greek alphabet is used.

The procedure adopted by Prof. Muraoka to instill in readers a sense of the incredible importance of learning and using the biblical languages, Hebrew, Greek, and Aramaic is to commence with a summary of his life’s work, followed by an introduction to the topic at hand.  It’s extremely interesting to read about the path someone takes to arrive at the place he or she occupies in the academy and Prof. M.’s journey is one of the most interesting you will every examine.  Also interesting to see is the rationale people have adopted in order to take them down that path.  And again, Prof. M.’s reason for being who he is and what he studies is amazingly engaging.

In part one, the little book at hand tells the stories of a variety of Hebrew texts and how a grounding in Hebrew aids in both exegesis and application. M. doesn’t tell readers what texts mean based on the Hebrew text, he tells stories from his life which illustrate how those texts have been utilized and the contexts in which they have been interpreted.  In sum, this little volume is a an autobiography written by an expert in the biblical languages which aims to show, and does indeed show, how very indispensable linguistic knowledge is, not only for sermons and studies, but for life.

In part two M. investigates Greek personal pronouns, the definite article, verbal forms, and finally Lk 7:36-50.  All illustrated from moments in his life, in real situations.

Part three is all about Aramaic, and here he discusses the singular and plural, the language and culture, and finally, Jerusalem.

Chapter four is extraordinarily interesting and may in fact be, after the biographical material at the beginning of the book, the most utterly engaging segment of the volume.  It focuses the reader’s attention on the Septuagint as a bridge between the Old and New Testaments.  Subsections of chapter four handle Gn 1:1, the various forms of love, biblical love as understood by a 19th century Japanese politician who became a scholar, foot washing, and the Septuagint’s relationship to the New Testament.

The work ends with a conclusion, and indices of biblical texts, and Hebrew, Aramaic, and Greek words.

The volume isn’t written for specialists, though everyone who studies Hebrew, Greek, and Aramaic will learn a lot from it.  Rather, it is a beautiful invitation to come to the Bible on its own terms and to hear its message in its own words.  And everyone serious about understanding the Bible, but especially those charged with expounding it, need to be able to do so.

As I tell my own students when we begin the study of Hebrew or Greek- the reason we need to study the biblical languages is because to fail to do so is to be akin to the medical doctor who never studied basic anatomy.  And that is simply inconceivable.  I also tell them that

Reading the Bible in translation is like kissing your spouse through a sheet.

It may work on one level, but ultimately it is just completely unsatisfying.

Go read this book.  Share it with your friends.  And then go learn Hebrew, Greek, and Aramaic if you don’t already know them.  Your life will be enriched, incredibly, and so will your teaching and your preaching.

The Synod of Dort: Historical, Theological, and Experiential Perspectives

This volume seeks to shed light on various aspects of the Synod of Dort in order to inform the contemporary reader of its proper historical and theological context and its experiential emphases. Some leading scholars of post-Reformation Reformed thought and the Synod have contributed essays to this work.

The present work, the contents of which, and the front matter of which are available at the link above, is a collection of papers commemorating the Synod of Dort, most of which were delivered at the ETS meeting in 2018 or at a conference at Westminster Seminary in California in 2019.  In that respect it is somewhat unique, as most volumes of this sort all stem from one event.

After the subject is introduced, the volume unfolds first with a series of essays which focus on both the French take on the problems Dort addressed and the aftermath of Dort in France.  The second section moves more widely to a consideration of the theological perspectives both present at Dort and refined in its wake afterwards.  The third section looks more precisely at specific issues stirred up from the theological seabed by the doings of the Synod.

The final chapter offers a portrayal of the abiding significance of Dort and its relevance for today.

The essays tend to be well written and expressive.   The most helpful were those by Donald Sinnema on Church and State relations at Dort, and Dolf te Velde’s very engaging treatment of the role of the Holy Spirit in the canons of Dort.

To get right to the heart of the matter: should you read this book? Will it be a good use of your time or will it waste several hours of your life?  My answer: yes, it is very much worth reading.

Or, in other words, those who have an interest in the topic will like this volume.  Those who don’t will not stick with it very long.

That, alas, is the fate of all books written for specific readerships.

Some Very Cool Things from ISD

James A. Sanders has been at the forefront of the study of canon formation, history of interpretation, and textual criticism, specializing in the Dead Sea Scrolls and the use of the Old Testament in the New. Like no one else, he is able to bring together exegetical detail with hermeneutical and theological insight. He moves deftly from exegetical, critical detail to hermeneutical options and overarching theological implications. In this important collection of essays we have the mature fruit of decades of research, including careful engagement with ancient texts and fair-minded ecumenical discourse with the greatest minds in the field. These studies laid the foundation on which today’s scholarly discussion is focused. ​

In his contribution to the fragmentary Jewish historians of Hellenistic times and their treatment of the biblical tradition Erich Gruen shows not only that the fragments disclose a remarkable range and diversity of texts, but also that their authors’ engagement with biblical texts was more light-hearted in tone, deliberately idiosyncratic, and, far from parochial in temperament, tended to connect with Hellenic and Near Eastern cultures in order to set Jewish traditions into a broader context. These historians did not see their mission primarily as setting the record straight. They provided arresting twists on biblical tales, alternative versions, provocative variations, and, almost always, some entertainment value. The sacrality of the Scriptures remained untouched.​

For the first time, the present commentary brings together all relevant aspects necessary to understand and appreciate this late portion of Old Testament Scripture: textual criticism; detailed philological and literary analysis; the two-fold historical context of the text’s Hellenistic environment, on the one hand, and biblical tradition on the other; and ultimately the very innovative theology of the book of Wisdom. Aspects of the book’s reception history as well as hermeneutical questions round off the commentary on the text.​​