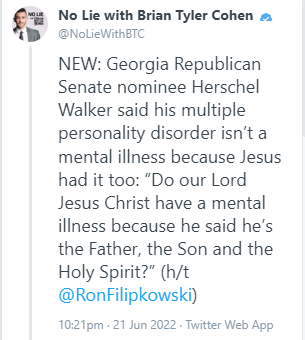 @HerschelWalker isn’t just theologically ignorant, he doesn’t have any idea what the Bible actually says (since nowhere does Jesus EVER claim to be the Father, Son and Spirit. NO WHERE). Like all theological dilettantes, Herschel should stay in his lane. Whatever that is.

I don’t know who their reporters are, or where they get them, but evidently none of them, and no one on the editorial staff, knows a thing about Christianity, the Bible, the Old Testament, or the way names work.

In case you don’t know (and shame on you if you don’t), the name ‘Jesus’ never occurs so much as one time in the Old Testament.

This is the garbage that the media vomits out whenever it covers ‘religion’.  It is imbecilic.  Bloody dilettantes. 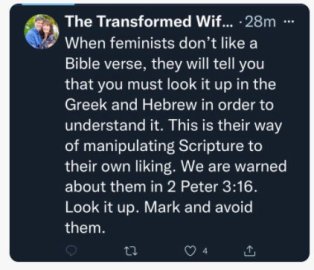 No need to even comment is there.  The ignorance is invincible.  Here’s your Dilly.  It’s well deserved.

Good heavens, twitter and facebook are just littered with biblical and theological dilettantism. It’s both disheartening and annoying.

Dear people, put the bible down, and back away from it. You shouldn’t be allowed anywhere near it.  And, honestly, if you can’t read it in Hebrew and Greek, you really should say nothing at all about what it ‘means’.

And, if you refuse my helpful advice, here’s your Dilly in advance.  You’ll soon deserve it.

This guy deserves a Dilly the Dilettante Award more than anyone in years.  Here’s why:

You don’t acquire that kind of ignorance in a few days.  That sort of stupidity takes decades to perfect.

But this bit, on why translations are ALWAYS better, takes the dilettante cake:

In discussing the originals versus translations, it’s important to remember these five ways a translation is superior.

Wow.  Here’s your VERY well deserved Dilly, Mr Gipp.  And may God have mercy on whatever congregation has the sad misery of having to listen to your word vomit Dreck. 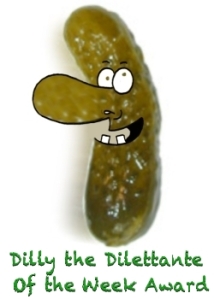 And probably the dumbest tweet of the year, but there’s still several months to go.

This is a prime example of someone bereft of understanding of either the Jesus movement or the dynamics of early Christian history.

But here’s your Dilly-

The ‘Seven Spirits’ of God as referenced only in the Book of Revelation have absolutely NOTHING to do with what you think they do.  Please, leave interpretation of Scripture alone.

That’s lunacy. It’s both historically ignorant and, worse, it implies that no one but English speakers have a real Bible. Utter nonsense and, frankly, demonic.

This is this year’s dilettante.

As time goes on, Mark Taylor‘s prophecies are getting increasingly incoherent. It’s almost as if he needs to convolute his prophecies more and more so it’s more difficult to point out the fact that they never come true. Either way, we have a new warning from Taylor, and it involves human traffickers, the Red Cross, and the Old Testament god Baal.

According to Taylor, Baal “feeds off the blood of the innocent,” namely aborted fetuses. But thanks to increased restrictions to abortions access in the US, that food source is “running dry.” That’s where the Red Cross comes in.

“We all know the Red Cross is corrupt. They’re into all of this,” he said in a video clip flagged by Right Wing Watch, adding that “they are literally grabbing people … in broad daylight.”

“We are entering into one of the most dangerous phases of this fight,” he continued. “I tell people, ‘I don’t care if you are a Christian or not, if you don’t have a concealed weapons permit, you need to get one. You need to learn how to use a weapon and you need to be carrying it right now because this is a very dangerous time that we are going to be entering into.’”

Watch out for a mass blood drive orchestrated by America’s blood banks, Taylor says, “because their sources are running out, so they can use that human blood for sacrifices, they can use it for drinking it, or whatever it is they do.”

Imbecile. The dilettante loon knows nothing of Baalism.  Or anything.  Firefighters should fight fires, not talk about theology.  They’re awful at it.  So, Mark, here’s your Dilly, pentebabbleist nutbag.

There’s no such word in Greek. The dimwit has just transliterated what he thinks a Greek letter signifies into an English equivalent. He actually thinks psi = y. Dilettante ignoramus. 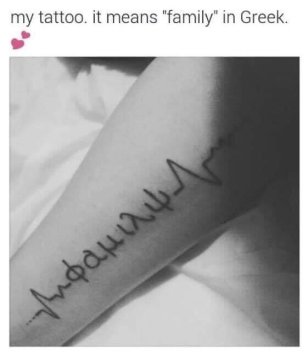 No, it means you don’t know anything about Greek.  Here’s your Dilly.

Joe is what happens when ignorant dilettantism meets biblical proclamation.  So, in recognition of your utter unsuitedness to any sort of pastoral task, here’s your Dilly, Joe!

His ‘review’ of John Barton’s magnificent book is the sort of garbage that one expects of a dilettante who knows absolutely NOTHING about the field.  His assessment of Barton’s latest book is puerile and juvenile.  It’s as though he has no understanding of either the Bible or biblical scholarship and his closing assertion that John Barton’s ‘admiration’ for the Hebrew and Greek Scriptures is ‘lukewarm’ (!!!!) is the most moronic thing I have read in years.  He knows NOTHING about John Barton’s lifelong devotion to the Bible and scholarship.  Lukewarm…   What a buffoon.

The Wall Street Journal should be ashamed that it published a review by a man whose entire claim to fame is that he writes reviews of political books for the WSJ.

Few ‘reviews’ infuriate me because, frankly, I’m used to dilettantes.  But this wretched piece of garbage is a hit piece by an ignoramus.  It is despicable.

Mr Swaim, here is your Dilly-

There’s so much wrong here, and they don’t even know it.  First of all, The Geneva Bible of 1599 is a revision of the 1564 edition.  Second, Luther had nothing to do with it.  Third, there’s no such thing as a ‘Luther Edition’ of the Geneva Bible.  Luther was dead decades before the Geneva Bible was published.  And finally, ‘Luthor’ (as the publisher’s advert spells it), is totally wrong.

Don’t buy things from dilettantes.  It just encourages them. 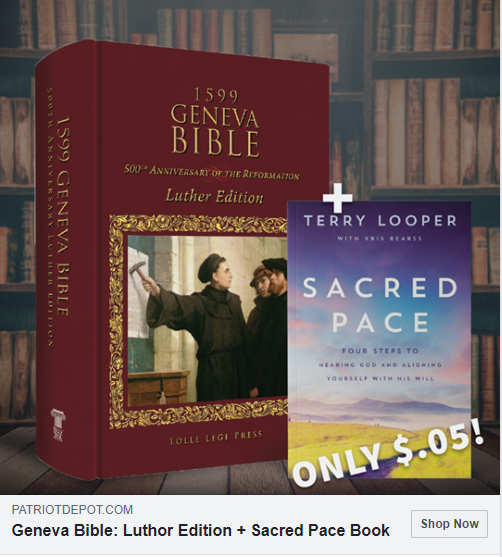 ‘Patriot Depot’ and ‘Tolle Lege Press’, here’s your dilly.  You richly deserve it:

If you need an example of the phenomenon in historical Jesus studies known as ‘gazing into the well and seeing one’s own reflection,’ this is it.

That isn’t Jesus that Fugelsang sees, but himself.  The historical Jesus is unknowable.  We have only texts from partisans who had no interest in portraying the Jesus of History, but only of portraying the Christ of faith.  So, John, here’s your Dilly-

I just wish I knew who the commentator was. Because if anyone deserves a dilly it’s him.

And make no mistake, that’s exactly what Sprankle is saying.  No consent = rape.  But what the imbecile ignores is that Mary does in fact give consent to the operation of the Holy Spirit:

Another fake academic pretending to know something about the Bible when he doesn’t even know the basic story.  What a buffoon.

It’s an essay, on the bible, about the ‘virgin birth’, by, now get this, not a biblical scholar, but by a psychologist!  Hey, Raw Story, why not get a climate change denier to write an essay about the weather?  Or an anti-vaxxer to write a piece on the perils of vaccinations?

Are you DAFT?  Do you know NO biblical scholars?  Hit me up, I can introduce you to a hundred who are more qualified than a psychologist to write an essay on the Bible.

God help me, I am SICK TO DEATH of journalists and psychologists and all manner of uninformed imbeciles pretending to know what they’re talking about when they talk about the Bible.  Stupid dilettantes.

Raw Story- here’s your Dilly.  Pass it along to the psychologist.  You two can share it this week.

They are dilettantes of the most dilettantish sort.  That’s what they should be called.  So I will.  And here’s their award, and yours, Mr Butters, for calling them scholars in the first place.

‘Congrats’.  I haven’t given out a Dilly in a while- but you certainly deserve it Mr Butters and company.