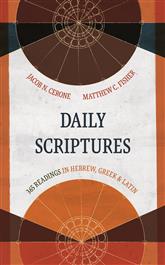 Pastors, students, and scholars not in the midst of language coursework often find it difficult to maintain their knowledge of biblical languages like Hebrew, Greek, and Latin. For those looking to do so in a meaningful but manageable way, this devotional offers 365 short daily readings, pairing an Old Testament passage in Hebrew and Greek with a corresponding New Testament passage in Greek and Latin. Lexical notes in English are included as a way of facilitating a comfortable reading experience that will build one’s confidence and ability in reading the Hebrew Bible, the Septuagint, the Greek New Testament, and the Latin Vulgate.

Cerone and Fisher provide here a series of 365 readings from Hebrew, Greek and Latin, organized by topic and beginning with ‘creation’ and running through a sort of chronological arrangement from Genesis to Revelation, concluding with ‘God’s reign’.

Not only are readings organized ‘chronologically’ through scripture, by topic, each is also assigned a date.  Beginning with January 1 and ending on December 31.  They exclude February 29th (I assume because they don’t care about leap year).

The readings themselves are brief. Just a line or two most of the time, with the Hebrew text lightly represented and the bulk being Greek.  There are readings not only from the Masoretic text but from the LXX, and the Greek New Testament and the Vulgate.  So half of the text is in Greek with a fourth in Hebrew and a fourth in Latin.

A nifty little ribbon bookmark is included, as are indices of the texts utilized.  Words that may not be all that familiar are annotated, but the notes are not located at the bottom of the page, but rather on the sides in the margin.  A bibliography of just over a page in length is also on offer.

Cerone and Fisher each wrote a preface.  Cerone’s is over 3 pages and Fisher’s not quite a page and a half.

The introduction is quite a useful thing and readers should resist the temptation to skip over it like 8 year old girl’s skip over cracks in the sidewalk so as not to break their mothers’ backs.  In said introduction our good editors describe their purpose, explain their pedagogical notes, describe the editions of the biblical texts they use, and go into a good bit of detail concerning their choices for organization and textual selection.  They also help readers understand their choice of words to gloss and give a table of abbreviations for the little grammatical notes that are included in the glosses.

I think this is a fine little book.  I would hope that people serious about keeping up their language skills would read more in the Hebrew Bible, the Greek New Testament, and the Latin Vulgate than just a line or two a day, but a little is better than nothing.  And every little bit helps people hold on to what they’ve learned.  Because languages, like muscles, must be used or lost.

The selection of texts is broad enough that readers aren’t stuck with bits from Paul or the Psalms, as if those were the only texts worthy of attention.  The fonts are really lovely and the page layout is neither cumbersome nor annoying.  The paper isn’t so thin that there’s bleed-through, and the binding is sturdy and well achieved.

I appreciate the editors’ hard work and the publisher’s willingness to take this project on and bring it to the public.  If you make the time to read a little selection each day, you will appreciate it too.