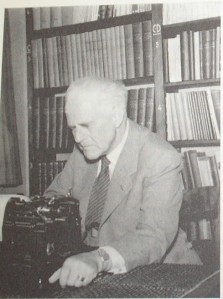 “Barth’s letter arrived on the morning of 5 April. Vogelsanger cycled to the clinic at Zollikerberg, and informed Brunner that “Karl Barth sends his greetings!” He then read Brunner this letter by his bedside. Brunner smiled, pressed his hand, and shortly afterwards lapsed into an uncon­sciousness from which he never reawakened. He died at noon on Wednesday, 6 April 1966 at the Neumünsterspital at Zollikerberg, near Zurich. His funeral at the Fraumünster in Zurich on 12 April 1966 was led by Vogelsanger. ” – Alister McGrath