Prophets, Priests, and Promises: Essays on the Deuteronomistic History, Chronicles, and Ezra-Nehemiah

This collection of essays has now been published- 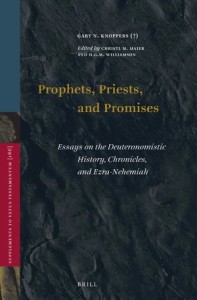 Shortly before his untimely death Gary Knoppers prepared a number of articles on the historical books in the Hebrew Bible for this volume. Many had not previously been published and the others were heavily revised. They combine a fine attention to historical method with sensitivity for literary-critical analysis, constructive use of classical as well as other sources for comparative evidence, and wide-ranging attention to economic, social, religious, and political circumstances relating in particular to the Persian and early Hellenistic periods. Knoppers advances many new suggestions about significant themes in these texts, about how they relate one to another, and about the light they shed on the various communities’ self-consciousness at a time when new religious identities were being forged.

I am extremely saddened to write today with the awful news that Gary Knoppers, John A. O’Brien Professor of Theology at the University of Notre Dame, died suddenly this morning.

The essays here collected, the full list of which you can read at the link above under ‘table of contents’, are the gathered works of one of this generation’s most gifted minds.  Ranging from the topics of ancient history and historiography, to scribal practices and mimesis, to David, the Law, the Temple, to the exile and the exilic period, Knoppers knew it all.  He was, in terms of biblical scholarship, a man who knew all the ins and outs of the whens and hows and whys.

Aside from knowing all the major (and minor) issues related to the scholarship of the Hebrew Bible, Knoppers was an excellent communicator, a writer with the ability to describe clearly and purposefully the subject at hand.

For many years I’ve been of the opinion that only people who really understand something are able to explain it clearly enough for someone generally educated to comprehend it.  The more complex the issue, the more an expert must understand it in order to be able to explain it.  Gary was that sort of person.  He was able to take the most complex issues in biblical studies and explain them so that students, colleagues, and even opponents could understand them clearly.

Each of the essays in the present volume is a tribute to its author.  Eight of them are newly published here for the first time, with the remaining seven extensively revised and updated before inclusion.  To put it another way, none of the essays in their present form have ever appeared anywhere else.

Each essay is fully documented, and there are plenty of materials pointed to for those interested in further investigation of any of the subjects covered.

People familiar with Knoppers’ work will know him to be a trustworthy friend in scholarship.  Those unfamiliar with him will find here what I hope will be an introduction to his thoroughness, thought, and writing style.  So informed, I sincerely hope they move on to read his commentaries and other works.

A worthy scholar deserves readers.  Gary Knoppers was among the worthiest.