Next Up For the Far Left: The Normalization of Pedophilia 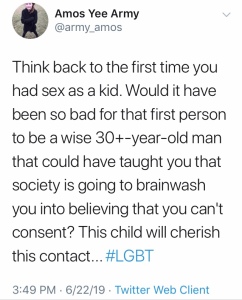 This is where the radical left wishes to take us.

That’s Nothing, France- We’ve Paid Congress For Over 200 Years and It Has Done Nothing

But make life miserable for everyone but the wealthy.  So, France, the people of America say of your complaint, ‘hold our beer’.

A regional authority in the south of France paid some 30 civil servants to do nothing for more than 25 years, it has been revealed.

French taxpayers have been spending more than €1 million (£897,000) a year to pay full salaries to the “phantom” bureaucrats, despite at least one of them being in full-time private sector employment.

An official report by the Provence-Alps-Riviera Regional Audit Office disclosed that others benefited from automatic promotions and pay increases based on seniority or length of service.

Send along your suggestions.  The deadline is just a couple of hours off, so please send them along.

The ‘Person in the Pew’ commentary series is the only series of Commentaries written by a single person on the entire Bible and aimed at layfolk in modern history.

The books are all available in PDF format from yours truly for a paltry $75 this Holiday week by clicking my PayPal Link.  It’s a good commentary.

[I] wanted to thank you for your commentary set I recently acquired. My daughter Chloe (age 11) and I are using the one on Mark as we read through and discuss the gospel every second evening. It helps shed light on the text without being academically burdensome for us to work through. .. [Y]our comments are pitched wonderfully for anyone wanting to begin serious engagement with the text. It also complements the more ‘scholarly’ works.

An 11-year-old was struck by [sic!] bullet intended for a person who fled a traffic stop on the city’s near northwest side Friday evening.

The Indianapolis Metropolitan Police Department says when officers conducted a traffic stop in the 2900 block of Barnes Avenue, one of three occupants fled on foot. Police chased on foot after the suspect, who ran through a house.

According to IMPD Captain Dulin Nelson, a neighbor saw the suspect and thought he was a robber, so he fired a shot at him, but missed. Nelson says the bullet traveled across the street, into a residence and struck the child.

The child was transported to Riley Hospital for Children in “stable condition.” She was treated and has since been released.

All three suspects were taken into custody, according to Nelson.

The person who fired the shot is being interviewed and is cooperating with investigators. No charges have been filed at this time.

I hope the family sues Mr Gun Nut for everything they can.

The State of Worship

15 years ago, 40% of church members attended four times a month. In 2018, only 10% attended four times/month, a 37% drop in worship attendance. So you could have the exact same membership church and on Sunday mornings it looks like you’ve lost over a third of your members. — Leonard Sweet

In 1998 The Southern Baptist Convention Adopted this Resolution

That document’s key statement: “Tolerance of serious wrong by leaders sears the conscience of the culture, spawns unrestrained immorality and lawlessness in the society, and surely results in God’s judgment.”

Funny how the fake Christians of today who call themselves Evangelicals no longer believe such a thing.

With thanks to Yancy Smith for the reminder.

Sermons in Geneva before Calvin were very much like most sermons today- silly stories and ridiculous tales were told by Priests who preferred that sort of nonsense to proclamation of Scripture.

… in consequence of the ridicule which the priests drew on themselves by the legends which they read from the pulpit, [the people] found it necessary to request the Grand Vicar to take order that in all the churches and convents the gospel should be preached according to the truth, without being mixed up with any fables, or other human inventions, that so the inhabitants might live in good accord like their fathers.*

“To sin by silence when they should protest makes cowards of men.” — Abraham Lincoln

Today With Zwingli: On the Preaching Office

On the 30th of June in the year of our Lord, 1525, Huldrych Zwingli published one of his most delightful and useful volumes, Von dem Predigtamt.  Who, and what, is a Preacher and what does his office entail?  But even more centrally, the ‘problem’ with which this book wishes to deal is the question, ‘ob ein ley sollt das wort gottes sagen’.  Do layfolk have the right to preach?

It might seem an odd question to us, but in 1525 Zwingli was at the center of the Anabaptist storm and among those people, unauthorized preaching was part and parcel of their belief that the entire church was corrupt, including all the ordained.  So preach they did- even if as equipped for it as a dog for higher science.

Anabaptism is wholly and totally against God.

Without a thorough knowledge of Hebrew and Greek there is no knowledge of the contents of the Old and New Testaments.  Every commentary in the world cannot measure up to the value of a knowledge of those languages.’

Romans 10:15 clearly shows that only the ‘sent’ may preach.

And of course by sent, Zwingli means duly authorized by the rite of ordination.  These re-baptizers, though, were sent only by their own wicked imaginations and were therefore neither legitimate nor authorized by God.

Zwingli’s book is a fantastic read.  For even more on Zwingli’s understanding of the preaching office, Hans Scholl’s essay is a valuable resource.

The Anniversary of the Death of Luther’s Mom

Martin Luther’s mother Margarethe died on June 30, 1531, in Magdeburg, Germany. From his descriptions of her, we know that he saw her as a stern but loving mother. Even Lucas Cranach the Elder’s portrait of her gives her a dower expression.

But by looking at all of Luther’s comments to and about his mother, we can see that her sternness came out of a strong desire for the best for her children. She, along with her husband Hans, made sure that her children received the best education that they could afford to give them. Later, we learn that she even came to Wittenberg occasionally to help Katie with the children who loved and adored their only living grandmother.

Finally, we know that Margarethe died secure in the faith which her famous son had proclaimed and which she also confessed as her own.

The portrait of Margarethe Luther is by Lucas Cranach the Elder in 1527.

Also known as Church funded vacations… Where participants spend an hour a day doing religious sounding things and spend the bulk of their time partying. 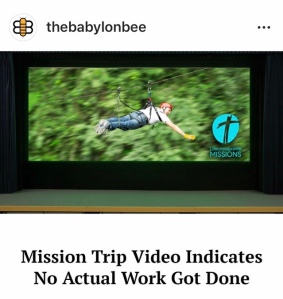 As Millions Of Evangelicals Prepare to Worship America this Sunday…

In a quiet, solemn moment Friday afternoon, local churchgoer Grant O’Neill took a few minutes to prepare his heart to give glory and honor to the United States at his church’s exciting Independence Day service this Sunday.

Knowing that he would be attending the upcoming patriotic service, O’Neill spent some time in quiet reflection over the state of his heart, so he’d be spiritually ready to give the U.S.A. his all on the Lord’s Day.

“Lord, as I prepare to attend my church’s Independence Day Bonanza this Sunday, I just pray that I would decrease and that the United States would increase, as I just learn to love America above all else with all my heart, with all my soul, and with all my strength,” he prayed to himself. “Let all distractions fade away. I know that as I gaze upon the American flags draped all over your house of worship, the things of earth will begin to grow strangely dim.”

O’Neill further prayed that the Lord would help him to be well-rested and refreshed on Sunday morning, so he could “really belt out” the lyrics to “America the Beautiful,” “The Star-Spangled Banner,” and Toby Keith’s “Courtesy of the Red, White & Blue” along with the choir.

As millions of Evangelicals prepare their hearts to worship America, Christians will be worshiping God.

Anyone Know Which Particular Edition This Error Occurs In

Of Whom the World is Not Worthy

There’s not much worse than burying people who are actually faithful. I wouldn’t trade one authentic Christian ‘of whom the world is not worthy’ for 5000 part time fake Christians.

For those interested in that sort of thing, it was 100 years ago today (29th June 1916) that the first proper planning meeting for SOTS was held. Nine scholars met in the rooms of R.H. Kennett at Queen’s College, Cambridge, and resolved to move ahead with the proposed “British Society for Old Testament Studies” and to hold an inaugural meeting in London (at King’s College) at the start of January 1917.

But Sure, Go Ahead and Cite Wikipedia in Your Paper- And Get That F You So Richly Deserve