In the Absence of Authentic Christian Theology…

The vacuum is always filled by absurdity.

Everyone in his life Failed this Child

Their indifference killed him.

Four months before Andrew “AJ” Freund’s parents were charged with his murder, the 5-year-old shared information on possible abuse with a doctor in Illinois.

Isn’t greater faith or a more devoted believer. It is apostasy with glee.

Why Luther Never Wrote a Commentary on the Bible 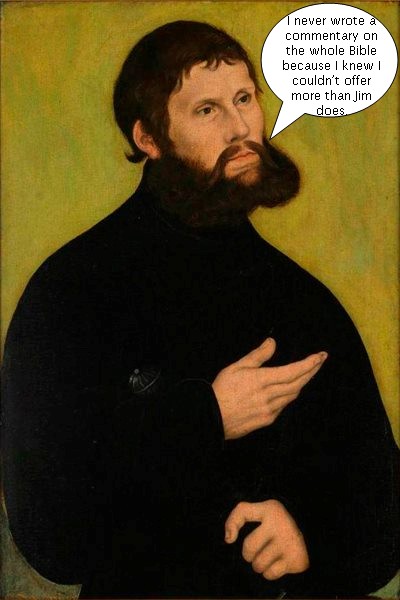 Aww shucks, thanks Martin.  You can get the Commentary Luther felt inferior to here.

The Difference Between Real Evangelism and Fake Convert Making

Calvin’s Deathbed Farewell Speech to the Ministers of Geneva

“ ‘Brethren, after I am dead, persist in this work, and be not dispirited; for the Lord will save this Republic and Church from the threats of the enemy. Let dissension be far away from you, and embrace each other with mutual love. Think again and again what you owe to this Church in which the Lord hath placed you, and let nothing induce you to quit it. It will, indeed, be easy for some who are weary of it to slink away, but they will find, to their experience, that the Lord cannot be deceived. When I first came to this city, the gospel was, indeed, preached, but matters were in the greatest confusion, as if Christianity had consisted in nothing else than the throwing down of images; and there were not a few wicked men from whom I suffered the greatest indignities; but the Lord our God so confirmed me, who am by no means naturally bold (I say what is true), that I succumbed to none of their attempts. I afterwards returned thither from Strassburg in obedience to my calling, but with an unwilling mind, because I thought I should prove unfruitful. For not knowing what the Lord had determined, I saw nothing before me but numbers of the greatest difficulties. But proceeding in this work, I at length perceived that the Lord had truly blessed my labors. Do you also persist in this vocation, and maintain the established order; at the same time, make it your endeavor to keep the people in obedience to the doctrine; for there are some wicked and contumacious persons. Matters, as you see, are tolerably settled. The more guilty, therefore, will you be before God, if they go to wreck through your indolence. But I declare, brethren, that I have lived with you in the closest bonds of true and sincere affection, and now, in like manner, part from you. But if, while under this disease, you have experienced any degree of peevishness from me, I beg your pardon, and heartily thank you, that when I was sick, you have borne the burden imposed upon you.’

“When he had thus spoken, he shook hands with each of us. We, with most sorrowful hearts, and certainly not unmoistened eyes, departed from him.”

Calvin, the best Frenchman the Church has ever produced.  See you some day, John.

19 and So Filled With Hate, and Inspired by a Politician’s Rhetoric…

That he shot total strangers.  Killing a mom and injuring others and traumatizing all the rest.  Hell is made for people like him, and his inspiration.