The Firing of Megyn Kelly is Peak Absurdity

It’s ridiculous. It’s really ridiculous.  Sure, it was a stupid thing for her to say. And sure, they should have made her attend some sort of sensitivity training.

But we’re crucifying people because they don’t know things. How is that right?  How is that fair? How is that just? We’ve gone stark raving mad in our blood lust of vengeance and we will all rue the day. Because one day we will all show that we don’t know how others feel about some particular something and our lives will be destroyed too.

Run and hide, friends.  Or don’t speak.  Someone will be triggered, you will be excoriated instead of being talked to like a human being, and your life will be ruined.

Comments Off on The Firing of Megyn Kelly is Peak Absurdity

This is Why American’s Should Stop Talking about Theology

One-quarter (25%) of Americans believe God plays a role in determining the outcome of sporting events. Nearly three-quarters (73%) of the public disagree. There are significant disagreements among Americans about the role that God plays in sports by religious background.

Nearly half (49%) of the public believes God rewards athletes who have faith with good health and success; about as many (47%) disagree. Strong differences of opinion are evident between Americans of different religious affiliations.

My theology Prof in College hit the nail on the head when he derisively remarked ‘God doesn’t care who wins a ball game’.  And.  He.  Doesn’t.  So, American theological dilettantes, stop pretending to be theologians.  You’re really awful at it.  Really just awful.

This is very exciting!!!! 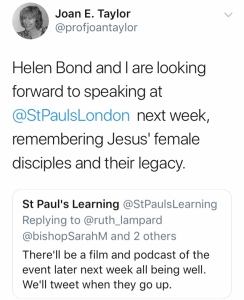 Stay tuned- when it posts I’ll pass it along.

Comments Off on Jesus’ Female Disciples

My paper on Dead Sea scroll forgeries in the Museum of the Bible has been published in The Conversation France.

You can read it on The Conversation (with better formatting) or here:

Etc.  It’s the best analysis of the situation.

My Current Mood Is…

Comments Off on My Current Mood Is…

On the Anniversary of His Birth…

I think I’ll mention a scholar who though virtually unknown today outside of very specialized circles, made tremendous contributions to the study of the 16th century, the Reformation, and in particular, to Zwingli studies: Fritz Schmidt-Clausing.

S-C was born on the 25th of October in 1902. He wrote voluminously and contributed both to the critical edition of Zwingli’s works and to Zwingli studies with, primarily, his works on Zwingli’s humor (which I translated a few years back) and Zwingli’s theology of liturgy.

Years back a very fine essay was written in commemoration of S-C and published in the Zeitschrift Zwingliana.

Comments Off on On the Anniversary of His Birth…