Approaching the Study of Theology: An Introduction to Key Thinkers, Concepts, Methods & Debates

Back in April I received a prepublication edition of this book. I’m reposting the review now after having received the published version which has just arrived. Sections marked UPDATE are new material for the present posting: 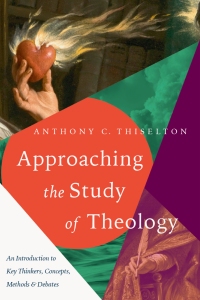 From the opening pages of the Bible, we learn of God as one who communicates with humankind—offering us first steps toward knowledge of the divine, the very foothold of theology. On this basis, Approaching the Study of Theology presents an engaging introduction to the breadth and depth of the study of theology, mapping the significant landmarks as well as the main areas of debate.

The book is divded into three parts:

Part I (Approaches) describes the major approaches to theology that have emerged and developed over time.

Part II (Concepts and Issues) explains the major concepts and issues, identifying theologians associated with each.

Part III (Key Terms) provides a helpful glossary of all the key terms that readers need to understand in order to better understand theology.

IVP have sent along a prepublication draft of this new work by Professor Thiselton.  In my review please note that no page numbers will be included because the draft manuscript includes none.

The work consists of an overview of theological trends in the introduction.  This overview discusses the biblical roots of theology and a description of  the major periods of theological development. Part One is very much akin to a ‘bible dictionary’ which lists, in alphabetical sequence, methodological approaches to theology including biblical theology, hermeneutical theology, political theology, and systematic theology among others.  Part Two adopts the same alphabetical sequencing but it’s concern is ‘Concepts and Issues’ like Atonement, Authority of the Bible, Justification, Resurrection of the Dead, etc.  These discussions, like those of part one, tend to be full and ‘encyclopedic’.  Indeed, part two is the bulk of the volume.  The third part of the volume, Key Terms, is simply a glossary.

The presentation is, necessarily, very general.  That is, each concept, term, method, etc. is described in quite sweeping terms.  The work aims to introduce, and merely introduce, the basics of theological enquiry.  The details are relatively accurate overall but sometimes they are incredibly inaccurate.

One glaring problem is what Thiselton writes about the Marburg conference:

In 1529 it became clear that there were disagreements among the Reformers on the nature of the Lord’s Supper.  Deeply concerned for Reformation unity, Luther sought a friendly conference with Zwingli, Melanchthon, and Bullinger (sic !)at Marburg. He did his best to achieve a united witness but Zwingli and others held firm in their beliefs…

The problems here are multiple: Luther didn’t seek any conference, friendly or otherwise, with Zwingli.  He was essentially forced into meeting with Zwingli and the others by Prince Philip.  He never wanted to participate and told friends on numerous occasions that the whole thing would be a waste of time.  He even wrote the Margrave thusly

I am indeed absolutely convinced that Your Sovereign Grace is completely sincere and has the best of intentions. For this reason I, too, am ready and willing to render my services in this, Your Sovereign Grace’s Christian undertaking, though I fear [my services] may be futile and perhaps dangerous for us. (Luther’s Works, Vol. 49: 230.)

Luther wasn’t interested in the meeting and thought it was a bad idea.

Further, Bullinger wasn’t there (see below).  And it wasn’t Luther who wanted to achieve a united witness but, again, the Prince and neither was it the others who were most intransigent- it was Luther.  In sum, then, the portrait of Luther here is totally wrong.  Thiselton simply misstates nearly every fact.

UPDATE:  the published version corrects the Bullinger error and replaces it with Bucer, rightly.  But the rest of the paragraph remains problematic.

As mentioned just above, the draft contains one particular error that I have reported to the publisher in hopes that there is still time before printing to correct it: Thiselton remarks, wrongly, that the conference in Marburg included Zwingli, Luther, and Bullinger (!).   Bullinger will be quite surprised to learn that.  Having offered a correction I’m happy to say that, thankfully, the editor has indeed agreed that this is an error (in consultation with the author) and have asserted that it will be corrected before the printing is completed.

The rest of the volume is not free of such egregious mistakes either, though.  For instance, in his treatment in part 3 of terms, Thiselton writes

This is simply untrue.  ‘daimon’ doesn’t occur at all.  δαιμόνιον occurs only 15 times. δαιμονίου occurs 4 times.  And the verbal form δαιμονίζεται occurs but once.  In fact, δαιμον* in all its various forms only occurs 78 times in the entire New Testament.

UPDATE: The published edition retains these errors.  Regrettably.  Consequently, what I wrote concerning the pre-publication draft is still true of the published version:

Thiselton has written a volume that contains much that is useful.  But readers should fact-check his assertions via other resources.  He isn’t always accurate.