A New Accusation Against Jesus…

Crossing Traditions: Essays on the Reformation and Intellectual History in Honour of Irena Backus 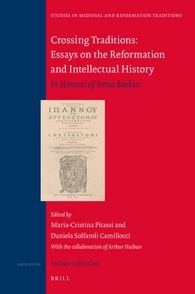 Edited by Maria-Cristina Pitassi and Daniela Solfaroli Camillocci (University of Geneva).  Irena Backus’ scholarship has been characterised by profound historical learning and philological acumen, extraordinary mastery of a wide range of languages, and broad-ranging interests. From the history of historiography to the story of Biblical exegesis and the reception of the Church Fathers, her research on the long sixteenth century stands as a point of reference for both historians of ideas and church historians alike. She also explored late medieval theology before turning her attention to the interplay of religion and philosophy in the seventeenth century, the focus of her late research. This volume assembles contributions from 35 international specialists that reflect the breadth of her interests and both illustrate and extend her path-breaking legacy as a scholar, teacher and colleague.

Still Another Rejection, By an Actual Theologian, of the Pope’s Ridiculous Effort to Defile the Lord’s Prayer

#Bam.  Read the rest.  The Pontiff should stick to whatever it is he was trained in and not dabble in interpretive issues.

A pastor from back in the late 70s of the church a friend is at told him that one year he received a Christmas card from a member.  It said, “Pastor, the best Christmas present you could give our church is your resignation!”

It seems that member sort of missed the whole point.

Michael Bird: Jesus had multiple erections throughout his life

Here’s the rush transcript of Michael Bird discussing the rigidity of Our Lord’s penis with ABC interviewer, Tom Ballard:

Michael Bird: I’ll tell you a real funny story. I taught religious education to some students … and I asked them a very provocative question. I said to them, ‘Did Jesus ever have an erection?’

Tom Ballard: ‘Did Jesus ever have an erection?’?

Michael Bird: I believe he did.

Michael Bird: Throughout the course of his life.

Tom Ballard: Would he have had an orgasm?

Michael Bird: I don’t know. He may have had, he probably had a nocturnal emission as a teenager.

Michael Bird: We all have…

Tom Ballard: Would he have… helped that along, if he was a red-blooded, normal man?

Michael Bird: What do you mean by…