The Reformation to the Modern Church 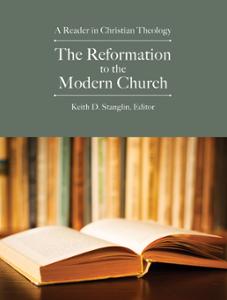 Engagement with primary sources is an essential part of effective teaching and learning in the church history or theology course. And yet, pulling together and distilling the right readings can be challenging, especially in more recent periods where tracing the diverse traditions that flow from the momentous events of the sixteenth century requires nuance.

In this all-new primary-source anthology, Keith D. Stanglin has done the heavy lifting for a new generation of classrooms. Stanglin has edited and introduced over 100 selections to create a reader that orients students to the ebb and flow of thought that moves out from the pre-Reformation period. Attentive to major movements such as confessionalization, pietism, skepticism, liberalism, and revivalism, Stanglin organizes the readings into nine chapters and provides helpful introductions to each: Late Medieval Contexts, Outbreak of Reform, Radical Reformation, Roman Catholic (Counter-)Reformation, Protestant Codifiers and Confessionalization, Enlightenment and Skepticism, Pietism and Revivalism, Liberal Protestantism and Responses, and Late Modern Fragmentation and Ecumenism.

Fortress has sent a review copy.  The volume contains, so far as the chapters are concerned-

Interested persons can read the introduction and chapter 1 (in part) here:

Allow me, if you will, to make one necessary clarification before discussing the book more fully: it is not quite correct that, as the editor suggests, to say that this is a collection of primary texts.

Direct interaction with primary sources is indispensable in the study of history. There is no better way to understand the major figures under discussion in a course than to read large chunks of their own writings. The selections that are included are intended not only to inform but also to spark the reader’s interest in the whole document from which a selection is taken, or to find other writings of the author and contemporaries. The study of history is incomplete without such reading (p. xiv).

This isn’t a matter of my being pedantic.  Rather, it is an attempt to make clear to potential readers that they will find here an excellent, even superior collection of (in most cases) translated texts (some having been written in fact in English originally).

And what a superior collection it is, being far more comprehensive than any similar volume with which I am familiar.  Keith Stanglin has done an absolutely brilliant job of assembling most of the very most important documents from the 14th through the present centuries.  It includes Catholic, Reformed, Protestant, Spiritualists, Anabaptists, rationalists, Anglican, Arminians (and accordingly, Wesleyan), Kantians, Edwards, Carey, Finney, Schliermacher, Kierkegaard, Barth, Bonhoeffer (no Bultmann or Brunner) Rahner, Hart and many many other important (if not always orthodox) thinkers.

No one will be surprised that I am quite interested in what our editor remarks concerning Zwingli in his brief biographical introduction to the man’s work (which little biography, by the way, the editor offers in preface to each thinker’s works).  He gets it all right, even noting that Zwingli arrived at his reforming program independently of Luther and that Zwingli is the real father of Reformed Christianity.  All except his suggestion that

To be precise, the Magistrates persecuted the anabaptists.  Zwingli debated them and wrote against them.  But he never raised a finger in persecution of them.  The myth of Zwingli the killer of the anabaptists is so deeply ingrained that even the best works often pass on the misrepresentation.

If readers are looking for a superb collection of materials spanning the centuries of Church history from the 14th to the present, I really can’t think of a book that does a better job of providing the full range of thought found in the Church Universal than this book.  Readers will find bits they love (like Zwingli and Calvin and Luther and Barth) and bits they despise (like the Spiritualists) and bits they are revolted by (like David Bentley Hart and John Hick).  But in and from all of those bits readers will learn.  And, hopefully, be spurred to read more of the authors and thinkers they have come to discover.  To that end, Stanglin also provides a bibliography in each segment suggesting further reading.  And his suggestions are the cream of the crop of volumes addressing those persons and issues.

On the back cover of its books Fortress Press has a tagline and it goes like this: