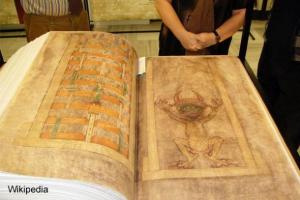 Thanks to Candida Moss for mentioning this on the facebook thing-

Codex Gigas, otherwise known as ‘the Devil’s Bible’ is the largest and probably one of the strangest manuscripts in the world.  It is so large that it is said to have taken more than 160 animal skins to make it and takes at least two people to lift it.  It measures approximately 1 metre in length. According to legend, the medieval manuscript was made out of a pact with the ‘devil’, which is why it is sometimes referred to as the Devil’s Bible. It was written in Latin during the 13th century AD, and although the origin of the manuscript is unknown, a note in the manuscript states that it was pawned in the monastery at Sedlec in 1295.

The story behind the making of Codex Gigas (“the giant codex”) is that it was the work of one monk who was sentenced to death by being walled up alive. Indeed, an analysis on the text does suggest that it was written by just one scribe due to the level of uniformity throughout.  The legend says that the monk produced the manuscript in just one night… with the devil’s help. However, it is not known where this legend started and it is suspected that it was religiously propagated. Stories and legends say that the Codex Gigas brought disaster or illness on whoever possessed it during its history.  Fortunately, the National Library in Stockholm, where it is currently housed, appears immune to the curse of the codex! Codex Gigas contains a complete vulgate Latin translation of the Bible as well as five other major texts. It begins with the Old Testament and continues with ‘Antiquities of the Jews’ by Flavius Josephus (1st century AD; ‘Encyclopedia Etymologiae’ by Isidore of Seville (6th century AD); a collection of medical works of Hippocrates, Theophilus and others; the New Testament; and ‘The Chronicle of Bohemia’ by Cosmas of Prague (1050 AD).

But the greatest mystery of all?  How did the illustrator of the manuscript know Joel Watts…  Unless…..  That’s it!  Joel Watts is the Devil!

UPDATE:  You can browse the manuscript online, here.  With thanks to Charles Baker for the tip on the twitter.

The panel discussion on online teaching was really quite good and quite well attended.  The ASOR session too was really nicely done.  A good afternoon altogether. 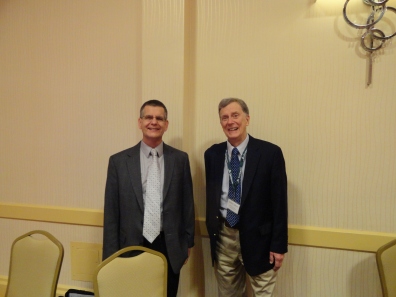 There were several excellent papers in the Hebrew Bible section this morning. Heading to other sections now but to the presenters in HB- well done.

Day Two: It’s Going to Be a Full One

So as I have time I’ll post photos and snippets.  Stay tuned for your only live coverage on the 2014 meeting of SBL/ASOR Southeastern region on J.I.M.

The Week in Review

Last month Dr. Donald Sinnema, one of the general editors of the Synod of Dordrecht project, presented at the Junius Institute Colloquium on “The Project to Publish a Critical Edition of the Documents of the Synod of Dordt, 1618-19.”  As the project describes, “Alongside the Westminster Assembly (1643-1649), the Synod of Dordrecht is one of the most important church councils in the history of the reformed tradition.” Moreover, “The goal of the edition project is to produce a critical edition of all the documents of the Synod of Dordrecht in their original languages (predominantly Latin, but some in Dutch, English, German and French) by an international team of institutions and scholars, mostly partners of Refo500. This critical edition will be published by publishing house Vandenhoeck & Ruprecht as a multi-volume series, and will be made available in digital format as well.”