It’s The Birth Anniversary (The Birth-iversary ©) of Martin Luther, Augustinian 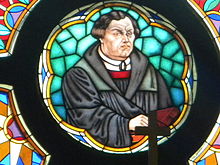 No need, is there, to delve into all those nifty biographical details on the anniversary of Luther’s birth.  I’ll just let him say something for himself:

Heretics are useful. We don’t realize how good it is for us to have opponents. If Cerinthus hadn’t lived, John would never have written what we have of his. Cerinthus attacked the person of Christ, and this compelled John to write and declare, ‘In the beginning was the Word’ [John 1:1]. John made the distinction of the three persons [of the Trinity] so clear that it couldn’t be made dearer.

So, too, Eck provoked me. He made me wide awake. I wished from the bottom of my heart that he would return to the way [of salvation], and therefore I wanted to strike out against him with my fist in the hope that he might be converted. But if he was always to remain as he had been, I wished him the papacy. He would have deserved it. He took all kinds of work upon himself, although he was in part paid for this, for he received income of seven hundred gulden from the parish in Ingolstadt alone. He would have been an inexpensive pope. They had nobody else who might have done it. He gave me my first ideas, and without him I would never have got this far. Accordingly our opponents are very useful to us, although they think they do us harm.

I am a Pastor, and Lecturer in Church History and Biblical Studies at Ming Hua Theological College.
View all posts by Jim →
This entry was posted in Modern Culture. Bookmark the permalink.

1 Response to It’s The Birth Anniversary (The Birth-iversary ©) of Martin Luther, Augustinian