The Unchained Bible, by Hugh Pyper 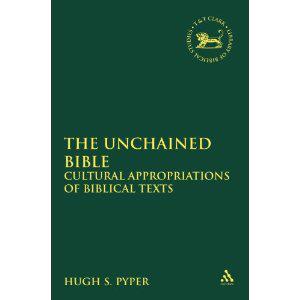 This volume explores a number of instances of unexpected but influential readings of the Bible in popular culture, literature, film, music and politics. The argument in all of them is that the effects of the Bible continues to have an effect on contemporary culture in ways that may surprise and sometimes dismay both religious and secular groups. That the Bible was at one time chained in churches is true. The subversive misreading of this enchainment as a symbol of a book in captivity to the established church is hard to suppress, however. Yet, once released from these chains, the Bible proves to be a text that gets everywhere and which undergoes surprising and sometimes contradictory metamorphoses. The pious advocates of making the Bible accessible who sought to free it from the churches’ chains are the very people who then decry some of the results when the Bible is free to roam.

Section 1. Making Sense/ The Beginnings of the Bible./Biblical Nonsense/

Section 2. Biblical Politics/Religion Despite the Bible/The Bible in the Metropolis/

Section 3. The Bible as Guidebook/Biblical Tourism: Portuguese Novelists and the Life of Christ/The Book of Dave versus the Bible/

Section 4. Music, Nationalism and the Bible/Jonah in Estonia, Joseph in Latvia: The Bible and National Identity in the New Baltic Republics/Musical Analysis and Biblical Interpretation: Brucknerian Transpositions/

Section 6. The Evolution of the Bible/When Jesus was (nearly) Scottish: Judaism and its Alternatives in Biblical Interpretation/Dispelling Delusions: Dawkins, Dennett and Biblical Studies/

I’m asking Eisenbrauns to send a copy.  It’s pricey but I want it so I’m going to skip Starbucks for a couple of days and buy it.  Hugh’s a gifted writer and funny to boot.