You Wanted That In Your High School Year Book? Really? Honestly? 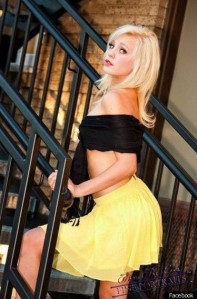 Well all I can say is I wouldn’t let my daughter out the door in such a skankified get-up and if she tried to put it in the High School year book there would be more than a little chatting going on.

A Durango High School senior had her yearbook portrait yanked and says that school administrators told her the photo violated school dress code.  The debated photo shows 18-year-old Sydney Spies wearing a black shawl and yellow skirt with plenty of skin in between.  However Spies is arguing that she was just trying to exercise her right to freedom of expression.

Does this child have no sensible parents or is she emancipated or do they just figure she’s 18 and she can do what she wants?   Freedom of expression my eye- she looks like she’s posing for a Playboy spread and not a yearbook.  Poor kid.  She’s got no one who cares enough about her to tell her that she’s presenting herself as less – a lot less- than a young lady and that she’s just sold herself out as a sex object.   People won’t be asking what she knows.  They’ll be asking where she goes.  She’s demeaned herself.  Tragic.

They’ve got the whole collection, at their typically excellent (beating Amazon the greedy) prices.  And speaking of the CEB, the winner of this week’s copy (in my weekly giveaway) is Dennis Gray!

If you’d like to throw your name in the hat for a copy, all you have to do is say so in a comment.  The next winner will be announced next Thursday.

And if you’re just now hearing about the CEB you can learn a lot more here.   And if smaller print isn’t for you, you’ll be happy to know that Large Print Editions arrive in March 2012!   It’s a grand translation and I’m glad to help them spread the word.

The Journal for the Evangelical Study of the Old Testament (JESOT)

JESOT is a new peer-reviewed journal devoted to the evangelical study of the Old Testament. The journal will be freely available for view and download at this site when it is finished. If you are interested in contributing to this project, see the submissionspage. Learn more about the scope of the journal and the editorial staff and board here.

On the BCS: An Observation

The BCS is to the legitimate choice of a National Champion in College football what voting is to the choice of the most read/popular blog.

But just so you get the point, read Frank’s piece on the BCS and, mutatis mutandis, apply it to blog votings.

The Bowl Championship Series climaxes Monday with a game in New Orleans between Louisiana State and Alabama, for the national bragging rights to Dixie. As there is a joke about the Holy Roman Empire, that it was neither holy, nor Roman, nor an empire, so can the same be said about the Bowl Championship Series.  It’s not a bowl. It’s a game played in the Superdome. It’s not a championship – just an exhibition because the teams have been appointed to show up without earning the right to challenge for the title. And it’s not a series because no team plays more than once. No wonder the BCS is so despised.

There’s something so very insincere about the BCS.  Insincere and deceptive.

Get Gundry’s Commentary on Ephesians Free

Baker Academic is proud to announce new ebook shorts from Robert H. Gundry.  In these verse-by-verse commentaries taken from Commentary on the New Testament, Robert Gundry offers a fresh, literal translation and a reliable exposition of every book of the New Testament.  Students and scholars will welcome Gundry’s nontechnical explanations and clarifications, and readers at all levels will appreciate his sparkling interpretations. Priced from $1.99 to $5.99 these affordable and convenient resources are available wherever ebooks are sold.  As we celebrate the release of this series, Baker Academic will be making selected entries from this commentary series free for one day only.  On Monday January 9th, Gundry’s commentary on Ephesians will be free to download for 24 hours on Amazon, CBD, and Barnes & Noble.  This will be followed by other selections made free to download on January 16th and 23rd.  For more information on this series, click here.

Completely correct isn’t it?  People hate Santorum and he’s not my cup of tea, as a politician.  But he is at least a person of strong principles who isn’t afraid to tell people what they are.  I find that refreshing for a politician.  Especially since most politicians are disgusting liars who are more than happy to say one thing to one crowd and something else to another.

Will I vote for him?  Not a chance.  Along with being a staunch Catholic (which is ok with me) he’s also a Christian Zionist and that, that I simply can’t stomach.

I’ve decided to abandon my self effacing ways and in future when a volume of mine comes out i’m going to mention it.   After all, at least my stuff is affordable and accessible (unlike lots of the Dreck published these days- stuff that’s neither interesting nor edifying).

And if my academic colleagues don’t like my stuff I can only admonish them with these words:  you aren’t my intended audience.  Anyway, since I sent a copy of my book on Zwingli to the exceptionally learned Giovanni Garbini and he wrote a note back thanking me for it and expressing admiration for it, I’ve decided to throw caution to the wind and become just like all the other bibliobloggers who push their books.  I’ll just have more to push, that’s all.  (They’d be more productive themselves if they’d stop playing world of warcraft and eating crumpets).

I’ve thought about it for 16 minutes and I’ve come to the interesting conclusion that false humility is as wrong as false pride. 😉

Passing Yourself Off as Someone Else Can be Hazardous

Just ask the Texas teen who found herself deported to Columbia because she thought it would be clever to use a false name.  Turns out that the name she chose was on the watch list and the State Department deported her.

The grandmother of a 15-year-old U.S. girl who was deported to Colombia after giving immigration officials a fake name is asking why officials didn’t do more to verify her identify.  U.S. immigration officials said they’re investigating the circumstances of the case involving Jakadrien Lorece Turner. But they insist they followed procedure and found nothing to indicate that the girl wasn’t — as she claimed — a woman from Colombia illegally living in the U.S.  The girl, who ran away from home more than a year ago, was recently found in Bogota, Colombia, by the Dallas Police Department with help from Colombian and U.S. officials.

Why’s grandma blaming the Government?  The girl never would have found herself in Columbia had she just told the truth.  Hopefully she learned an important life lesson.  Though given the inability of most people to learn from their own mistakes or the mistakes of others, I doubt it.

You can trust Henry- he will maintain your privacy.  But others, not so much.  So be careful.  That’s the sum of the matter.  Everyone needs friends like that – to advise them who they can trust and who they can’t.

Newt apparently doesn’t know that most recipients of welfare are white.  And of those most are elderly and children.  So telling Blacks that they should prefer a paycheck to a welfare check is both racist, moronic, ill-informed, and reprehensible.

Or to put it in the form of a question: Mr Gingrich, why do you want elderly white people and children to starve?  And you’re one of the Presidential candidates?  This speaks poorly of your party.

Just days after Republican presidential hopeful Rick Santorum took heat for singling out blacks on entitlement reform, Newt Gingrich called out the African-American community for being dependent on food stamps — despite the fact that blacks make up less than one third of recipients in the food stamp program.  Gingrich, during an appearance in Plymouth, New Hampshire, spoke about remarks he would theoretically make if invited to speak to the NAACP.  “I’m prepared, if the NAACP invites me, I’ll go to their convention and talk about why the African American community should demand paychecks and not be satisfied with food stamps,” Gingrich said.

I’d vote for them.  Just because.

The Leader of the Episcopal Church is a Heretic

Who simply doesn’t understand Christian theology. She just doesn’t. There’s not a driplet of Christian orthodoxy which permits her theory or accepts it as legitimate. Either access to God the Father is exclusively available through Christ or it isn’t. It’s either/or not both/and as the Episcopalian Arch-Heretic would have it (along with many pseudo-Christians these days).

You don’t have to like Christianity’s historical exclusivism at all. But you can’t consider yourself a Christian in the truest sense of the word if you abandon it.