The Quest for Solomon’s Mines: Liveblogging 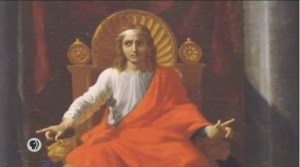 The previously mentioned NOVA / NatGeo special kicked off with a recitation of the biblical storyline concerning Solomon and asks where this famously wealthy king’s wealth came from.  New discoveries may hold the key.  Eric Cline is shown, ‘so far, outside the Bible, there is no evidence for Solomon’.  Then the special launches into ‘new finds from Solomon’s era’ including the oldest Hebrew text may shed light on the topic.

After the commercial break-

The existence of Solomon is simply taken for granted, as is the historical facticity of the narrative of the bible.  Quotations therefrom pepper the presentation, sans any critical reflection.  However, archaeological evidence is lacking.  Israel Finkelstein appears  remarking to that effect and then appears Thomas Levy.   While Solomon’s mines are never mentioned in the bible, that hasn’t stopped questers: new finds are giving credence to the historical accounts in the Bible and casting new light on Solomon’s era.  Petra, and Edom are discussed (with Levy).  Edom was a kingdom before Israel and Levy wants to know how Edom acquired such wealth.  Multiple shafts in Edomite territory, slag, and copper, all indicate an ancient mining and smelting operation, which Levy believes may have been the source of Edomite wealth.   The process of smelting and refining is described and illustrated by one of Levy’s students.  It was extremely difficult to produce copper.  But Levy believes he has discovered a copper producing factory;  a factory complex town which covered 25 acres.  Indeed, production was so intense that pollution is sill being detected from the process.  Here, copper was produced under the pressure of exploding demand for metal tools and weapons.  A sort of ‘earliest industrial revolution’ was taking place.  But where did they get the copper to fuel the industry?  From mines nearby manned by slaves 3000 years ago, and carried by camel caravans from mine to smelter at  Khirbet en Nahas.

Amihai Mazar appears describing copper trade in Israel.  Levy opines that Solomon’s Temple may have made use of copper from this very smelting factory.

But who could or would have controlled this factory?  In the centuries before Solomon, it was the Egyptians.  In the 12th c. BC a seismic shift occurred and the political structure of the Bronze Age collapsed.  Into this political void new powers arose.

Yet Khirbet en Nahas seems to have been an  Edomite smelting plant.  Graves near the site indicate Edomite inhabitants and are probably to dated to the 10th century BCE, before the Edomite kingdom was at its ascent and therefore suggesting that the biblical account of David’s campaigns against Edom may have been historically accurate.  Did David invade Edom to acquire the mines and did he then pass them to his son Solomon?

Archaeologists to this point have found nothing supporting a ‘davidic kingdom’ (the tel Dan inscription is mentioned but dismissed as lacking sufficient proof).  But if Solomon were a mere ‘tribal ruler’ how did he become a great king (a la the bible)?  Because the tales concerning Solomon were exaggerated and ’embroidered’.

Or were they?   Discoveries at Khirbet Qeiyafa may resolve the debate once and for all.  Yosef Garfinkel’s finds there suggest (according to him) an extensive 10th century ‘kingdom’.  And, moreover, he suggests, it was an Israelite city.  The city is from David’s time- the earliest ever found.  And among the discoveries there, the Qeiyafa Ostracon.

When clearly photographed, the ostracon was sent to Bill Schniedewind at UCLA, who described the script as ‘Canaanite’, but the words Hebrew.  This is the most ancient Hebrew text so far found.  But what does it say?  Individual words are accessible, and it’s not simply a list of names but an actual text.  But it has still not yet been fully deciphered.

Yet what it shows is that in Solomon’s century texts were being written in cities under Israelite control.  This implies that the biblical narrative has more historical underpinning than many have assumed heretofore.

Did Shishak’s invasion disrupt metal production at Khirbet en Nahas at the end of the 10th century?  Is this another clue that the biblical telling has it right?  Was Khirbet en Nahas King Solomon’s mine?  Did Shishak strike there to cut off Israel’s supply?

The program ended with a promise that it would be available on the NOVA website as a streaming video.  If you missed it you might check back there in the near future to see if it’s up.

It really was, to be fair, quite interesting and very well done.  Much, much better than anything Simcha has done.  Much better.

I am a Pastor, and Lecturer in Church History and Biblical Studies at Ming Hua Theological College.
View all posts by Jim →
This entry was posted in Archaeology, Bible. Bookmark the permalink.

8 Responses to The Quest for Solomon’s Mines: Liveblogging