Today Prof. Rolly Christopherson, with the assistance of Prof. Jurgen Kleinherd announced the discovery of the oldest fragment of the Epic of Gilgamesh. 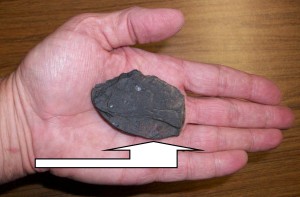 Barely visible at the bottom of the very ancient and very damaged tablet are what the epigraphers responsible for deciphering the find claim are the opening words of Gilgamesh.

Though less visible, the cuneiform is still apparent (if you squint just right).

Archaeologists working in the Eastern United States were stunned to have discovered this tablet fragment whilst excavating an Indian burial ground.  This proves to the archaeologist’s satisfaction that the Indian’s drew their legends of a flood directly from the oldest Near Eastern sources.  What puzzles those at the dig is how the fragment made its way to North America and how the Indians were able to read it.  Nevertheless, they are certain that this is exactly what happened and the proof is in the tablet-pudding.

When pressed, Christopherson said that further tests were necessary but they would in no way disprove what had been announced and in fact were the facts to demolish their theory, such facts would neither receive wide public attention or scholarly interest.  ‘Once the toothpaste is out of the tube, you can’t put it back in no matter how hard you try’ Chrstopherson snapped.

4 thoughts on “The Oldest Fragment of the Epic of Gilgamesh Discovered!”